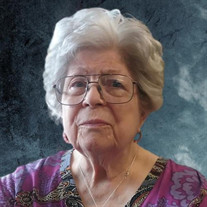 ST. PAUL, VIRGINIA –Belva McCamey Simmons, 90, entered into eternal rest on Monday, July 12, 2021. She was born in St. Paul, Virginia; daughter of the late Arthur T. and Bessie M. Glovier McCamey. She was preceded in death by her husband, Herbert L. “Buddy” Simmons; one sister, Kathy Osborne; and one brother, Jack McCamey. Ms. Simmons graduated from St. Paul High School in St. Paul, Virginia. She immediately began working for C & P Telephone Company in St. Paul, Virginia. Later she relocated to Baltimore Maryland and from there she worked at several other locations throughout the United States. She worked for Avon and T. Rowe Price for many years. Upon retirement, she returned to St. Paul, Virginia and helped care for her mother and father until their death. During her last year, she was a resident of the Laurels, in Norton, Virginia. She had many hobbies that consisted of caring for birds, flowers, and doing what she could for others, especially her family. Ms. Simmons was a faithful supporter of several religious ministries. She was a member of Clinch Valley Chapter O.E.S. #152 in St. Paul, Virginia. She is survived by one brother, Donald McCamey and wife, Joan of Castlewood, Virginia; two sisters, Ella Sue Hobbs of Cleveland, Virginia and Carol Price of Manassas, Virginia; and many nieces and nephews. Funeral Services for Belva McCamey Simmons will be conducted at 7:00 p.m. Wednesday, July 14, 2021, at Castlewood Funeral Home Chapel in Castlewood, Virginia with Brother David Miller officiating. Committal Services and Interment will be conducted at 11:00 a.m., Thursday, July 15, 2021 at Temple Hill Memorial Park in Castlewood, Virginia. Family and friends will meet at the funeral home and go in procession to the cemetery leaving at 10:30 a.m. Thursday. Pallbearers will be family and friends. The family will receive friends from 5:00 p.m. until 7:00 p.m., Wednesday, July 14, 2021, at Castlewood Funeral Home in Castlewood, Virginia. The family wishes to thank all of those who cared for her at the Laurels, in Norton, Virginia, and at Norton Community Hospital. Flowers will be accepted, but donations may also be made to Nash’s Ford Baptist Church, P.O. Box 1244, Lebanon, Virginia 24266. Online condolences may be sent to the Simmons family through our website and a video tribute may be viewed at www.castlewoodfuneralhome.com. The funeral service will be available for viewing on our website following the service. Castlewood Funeral Home is in charge of the arrangements.

ST. PAUL, VIRGINIA &#8211;Belva McCamey Simmons, 90, entered into eternal rest on Monday, July 12, 2021. She was born in St. Paul, Virginia; daughter of the late Arthur T. and Bessie M. Glovier McCamey. She was preceded in death by her husband,... View Obituary & Service Information

The family of Belva "Bea" McCamey Simmons created this Life Tributes page to make it easy to share your memories.

Send flowers to the Simmons family.