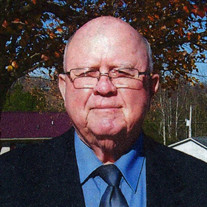 CASTLEWOOD, VIRGINIA - Carl "Sonny" Taylor Jr., 89, died Tuesday, January 21, 2020, at Bristol Regional Medical Center in Bristol, Tennessee. He was born in Tazewell, Virginia; son of the late Carl and Belle French Taylor. He was preceded in death by his wife, Thelma Castle Taylor and one sister, Margie Cozzolino. He was a veteran of the United States Air Force, serving in the Korean War. He retired from Pittston Coal Company, was a co-owner of Boyer & Taylor Tax Service, and attended Fort Gibson United Methodist Church, in Castlewood, Virginia. He is survived by his one son, Tim Taylor of Castlewood, Virginia; one sister, Dorothy Cox of Bristol, Virginia; three grandsons, Matthew and wife, Crystal of Hermitage, Tennessee, Jonathan of Bristol, Tennessee, and Jeremy of Chattanooga, Tennessee; one great-granddaughter, Daphne; one special friend, Diantha Viars of Johnson City, Tennessee; and several nieces and nephews. Funeral Services for Carl "Sonny" Taylor Jr. will be conducted at 7:00 p.m. Friday, January 24, 2020, in Castlewood Funeral Home Chapel in Castlewood, Virginia with Rev. Harry Layell officiating. Committal Services and Entombment will be conducted at 11:00 a.m. Saturday, January 25, 2020, in the Tower of Prayer Mausoleum - Temple Hill Memorial Park in Castlewood, Virginia. Family and Friends will meet at the funeral home and go in procession to the cemetery leaving at 10:30 a.m. Saturday. Military Rites will be conducted by the United States Air Force Honor Guard, Veterans of Foreign Wars, and the Disabled American Veterans. Pallbearers will be Family and Friends. The family will receive friends from 5:00 p.m. until 7:00 p.m. on January 24, 2020, in Castlewood Funeral Home in Castlewood, Virginia. Online condolences may be sent to the Taylor family through our website at www.castlewoodfuneralhome.com. Castlewood Funeral Home is in charge of the arrangements.

The family of Carl "Sonny" Taylor, Jr. created this Life Tributes page to make it easy to share your memories.