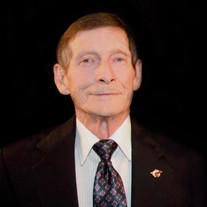 “I’ve have fought a good fight, I have finished my course, I have kept the faith” 2 Timothy 4:7-8 DANTE, VIRGINIA – Cecil Edward Rose Sr., 82 of Dante, passed away without regret or fear and found peace when he was finally reunited with the love of his life and wife, Shelby Rose on April 15, 2021, after a valiant and courageous battle with cancer. Born in West Virginia to the Late Harless Hayden and Mary Alice Mullins Rose in October of 1938, Cecil was the 2nd of 16 children born to Harless and Alice. In addition to his wife he is pre-deceased by two brothers, Junior and Jimmy Rose as well as three sisters; Goldie Holbrook, Emma Jean Wolfe, and Ruth McCoy. He was a loving husband, father, grandfather, friend, and above all a Godly man who never lost his faith. He could fix any problem and had a solution or tip for anything. When his health allowed he loved gardening and just being outdoors, even if it meant just mowing the grass, which was one of his favorite things to do. He wasn’t just a dad, he was a teacher, and he was a giver and was kind to all. He wasn’t afraid to help others and was always there if anyone needed anything. His faith is a testament of how he lived his life. He was a very hardworking man and even in his 80’s had a very strong will that he was going to do what he wanted to do, because “it won’t fix itself” He married the love of his life on March 1, 1958. Together they shared 53 loving years and you’d never find one without the other. In 1960 they welcomed their first son Cecil Edward Rose, Jr., and in 1966 they had another son Jack Eugene Rose. Cecil worked as a coal miner for many years to support his family. Moving from Virginia, to Illinois to Verner, West Virginia. While in West Virginia, Cecil was a member of Aracoma Masonic Lodge # 99 of Logan, West Virginia. Later, they returned to Virginia to be closer to family. When Shelby died in 2011, the family lost not only her but also a part of him. Cecil is survived by his two loving sons, Cecil Edward Rose, Jr. “Eddie” and wife, Debbie of Charleston, West Virginia and Jack Eugene Rose and wife, Kathy of Cleveland, North Carolina; two grandchildren whom he thought the world of, Brian Edward Rose and wife, Jonna of Verner, West Virginia and Kailah Rose and husband, Michael Metzbower of Fort Carson, Colorado; four brothers; Barney and wife, Mildred, Franklin and wife, Patricia, Randy and wife, Cheryl and Bobby and wife, Tammy; six sisters, Adelene Scarberry and husband, Jimmy, Kathy Rowe and husband, Junior, Robin Woodruff and husband, Ricky, Mary Hall, Faye Powers and Lois Hayes and husband, Kyle; he is also survived by three great-grandchildren, Kolton Rose, Adalynn Rose, and Keith Thompson; and numerous nieces and nephews. Cecil never met a stranger and loved with his entire heart. He was never afraid to tell someone he loved them or offer a helping hand. He was never one to complain, nor boast. To know Cecil was to know love. He was the kindest man a person could ever know, a knowledgeable father, the best grandfather, and the very best friend. It was a privilege and honor just to know him. He was a godly man, but also a family man. Family was very important to Cecil. He was a firm believer in Family and that it is most important and comes first. It is a great loss to all who knew and loved him. He will not be forgotten and will be dearly missed. If love would’ve saved you, you would have lived forever. He did not lose to cancer, because cancer could not take away the love he had for his family or his trust in the Lord that one day, he would be whole and reunited with the love of his life, parents, siblings, and friends. Cancer touched his body but not his faith. It could not tarnish the beautiful heart of gold he had nor could it take away the purity of his soul and love for his family. Following the COVID-19 restrictions set forth by the Governor of Virginia on face-covering requirements and social distancing, Funeral Services for Cecil Edward Rose, Sr. will be conducted at 12:00 p.m. Monday, April 19, 2021, in Castlewood Funeral Home Chapel in Castlewood, Virginia with Rev. Darrell Milgrim and Rev. Danny Meade officiating. Interment will follow in Temple Hill Memorial Park in Castlewood, Virginia where he will be laid to rest beside his beloved wife and soulmate. Pallbearers will be Michael Rose, Jarrett Rose, Randy Rose, Bobby Rose, Jimmy Scarberry, and Ricky Woodruff. Honorary Pallbearers will be Barney Rose, Franklin Rose, Junior Rowe, Kyle Hayes, Kolton Rose, and Keith Thompson. The family will receive friends from 11:00 a.m. until 12:00 p.m. Monday, April 19, 2021, in Castlewood Funeral Home in Castlewood, Virginia. Come as you are, as we are all family and equal in the eyes of the lord. In lieu of flowers, donations may be made to the Shriners Hospitals for Children Processing Center at P.O. Box 863765, Orlando, Florida 32886, or online at https://donate.lovetotherescue.org. Online condolences may be sent to the Rose family through our website and a video tribute may be viewed at www.castlewoodfuneralhome.com. Castlewood Funeral Home is in charge of the arrangements.

The family of Cecil Edward Rose Sr. created this Life Tributes page to make it easy to share your memories.

“I’ve have fought a good fight, I have finished my course, I...

Send flowers to the Rose family.