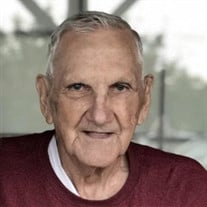 PORT RICHEY, FLORIDA - Clarence Emmitt Hobbs, 91, went home to be with his Lord and Savior, Tuesday, January 7, 2020, at his home surrounded by his loving family. Clarence was born in Dante, Virginia; son of the late George and Lakie Hobbs. He was preceded in death by two sons, Clarence Emmitt Hobbs, Jr. and David Lee Hobbs; two grandchildren, Bradley Scott Perry and Tara Lee Hobbs; four brothers, Early Hobbs, Marvin Hobbs, Rev. James Hobbs and Pastor Bobby Hobbs; three sisters, Bertha Brooks, Gladys Williams, and Beulah Campbell. Clarence graduated from Dante High School where he was active in various sports; a standout in basketball, playing on various traveling teams and receiving a basketball scholarship to Lincoln Memorial University upon his high school graduation. He was a retired coal miner and proud U.M.W.A. Local #7950 member for sixty-five years. He was previously employed by Clinchfield Coal Company for 36 years, where he also worked as a company safety inspector, section boss and member of the mine rescue team. The true passion of his life was loving and serving his Savior and Jesus was the head and heart of his home. Clarence loved studying the gospels and reading Christian books, amazing his family with his ability to quote scripture and verse. “Pa”, as he was known, made Jesus real in the stories he told and he never grew tired of talking about the Bible and his Savior with others. He is survived by his loving wife of sixty-six years, Shirley Virginia Hobbs; four daughters, Judy Perry and husband Brad of Clintwood, Virginia, Karen Lynn Castle of Castlewood, Virginia; Carolyn Ann Phipps of Johnson City, Tennessee, and Teresa Gail Hobbs of Lexington, Kentucky; one son Timothy Jay Hobbs of Clearwater, Florida; two daughters-in-love, Beverly Hobbs of Kingsport, Tennessee and Linda Hobbs of Port Richey, Florida; nine grandchildren, and fourteen great-grandchildren; two sisters, Buena Evans of Coeburn, Virginia and Shirley Linkous of Castlewood, Virginia, numerous nieces, nephews and countless friends. Second only to the love of his Lord and Savior Jesus Christ, Clarence was known for the love he had for his family and friends, his warm hugs and sense of humor. Funeral Services for Clarence Emmitt Hobbs will be conducted at 7:00 p.m., Monday, January 13, 2020, in Castlewood Funeral Home Chapel, Castlewood, Virginia with Rev. Roger Barker, Rev. Brian Walls and Rev. Teddy Phillips officiating. U.M.W.A. Rites will be conducted by Sub-District 28 Chaplain Corps at 6:45 p.m., Monday before the funeral services. Committal Services and Entombment will be conducted at 11:00 a.m. Tuesday, January 14, 2020, in Valley View Mausoleum at Temple Hill Memorial Park in Castlewood, Virginia. Pallbearers will be grandsons and friends. The family will receive friends from 5:00 p.m. until 7:00 p.m. Monday, January 13, 2020, at Castlewood Funeral Home in Castlewood, Virginia. Online condolences may be sent to the Hobbs family through our website and a video tribute may be viewed at www.castlewoodfuneralhome.com. Castlewood Funeral Home is in charge of the arrangements.

PORT RICHEY, FLORIDA - Clarence Emmitt Hobbs, 91, went home to be with his Lord and Savior, Tuesday, January 7, 2020, at his home surrounded by his loving family. Clarence was born in Dante, Virginia; son of the late George and Lakie Hobbs.... View Obituary & Service Information

The family of Clarence Emmitt Hobbs created this Life Tributes page to make it easy to share your memories.

Send flowers to the Hobbs family.