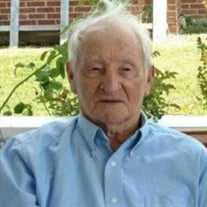 ST. PAUL, VIRGINIA - Dave E. Austin, 91, went to be with the Lord on Thursday, February 27, 2020, at his home surrounded by his loving family. He was born in St. Paul, Virginia; son of the late YZ and Betty Austin. He was preceded in death by four sisters, Mary, Janie, Lillian, and Betty; and three brothers, James, CC “Bug, and Joe. He served in the United States Army during the Korean Conflict, spending time in Germany and France as part of the United States Support Group. Following his service, he returned home and began his career as a Coal Tipple operator and later becoming a Coal Preparation Plant Superintendent for VA Iron Coal and Coke, Eastover, and VICC once again. He was a beloved supervisor with most of his employees calling him “Papaw”. He was known for his hard work and ability to get the job done while treating everyone with respect. He accepted Jesus Christ as his Lord and Savior and attended Midway Baptist Church where he was baptized. Dave married the love of his life, Peggy Hamilton in 1951 and they had five loving children, four boys, and one girl. He spent his life loving and caring for his family. He always led by example and the lessons he taught are the backbone of our family. He was a friend to all, always willing to help anyone in need and did not esteem himself better than others. He is survived by his loving wife of sixty-nine years, Peggy Austin; one daughter Vickey Allen and husband, Jackie; four sons, David Austin and wife, Tammy, Terry Austin and special friend, Martha Sexton, Steve Austin and wife, Cheryl, and Jeff Austin and wife, Linda; eight grandchildren; ten great-grandchildren; many nieces, nephews, and loving friends. Funeral Services for Dave E. Austin will be conducted at 2:00 p.m. Sunday, March 1, 2020, in Castlewood Funeral Home Chapel in Castlewood, Virginia with Rev. Doug Trent and Rev. Larry F. Powers officiating. Interment will follow in Temple Hill Memorial Park in Castlewood, Virginia. Pallbearers will be grandsons. The family will receive friends from 6:00 p.m. until 8:00 p.m. Saturday, February 29, 2020, in Castlewood Funeral Home in Castlewood, Virginia. The family would like to express special thanks to the ICU II Unit and Fourth Floor Nurses and Staff at Balled Health in Bristol, Tennessee along with Martha Sexton and Tammy Austin for their care. Online condolences may be sent to the Austin family through our website and a video tribute may be viewed at www.castlewoodfuneralhome.com. Castlewood Funeral Home is in charge of the arrangements.

ST. PAUL, VIRGINIA - Dave E. Austin, 91, went to be with the Lord on Thursday, February 27, 2020, at his home surrounded by his loving family. He was born in St. Paul, Virginia; son of the late YZ and Betty Austin. He was preceded in death... View Obituary & Service Information

The family of Dave E. Austin created this Life Tributes page to make it easy to share your memories.