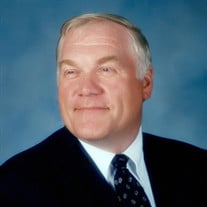 CASTLEWOOD, VIRGINIA - Dennis Garland Hensdill, 72, of Castlewood, Virginia, passed away peacefully in the presence of family on Wednesday, April 14, 2021. He was preceded in death by his parents, Arnold William and Eula Childress Hensdill, two brothers John David Hensdill and Doyle Leon Hensdill, niece Deanna Hensdill Franklin, and two brothers-in-law Herman Hodges and Bob Carlson. Dennis was born in Lebanon, Virginia on June 16, 1948. A 1966 graduate of Castlewood High School, Dennis was an outstanding student and athlete, receiving a football scholarship to attend East Tennessee State University. After completing a Bachelor’s degree at E.T.S.U., he started his teaching and coaching career at Central High School, Shenandoah County, Virginia. In 1972, he returned to Castlewood as a teacher and coach at Castlewood High School. In 1975, he received his Master’s degree at the University of Virginia and married Glenna on July 3. Dennis served the community of Castlewood for many years through his teaching, coaching, and administrative roles in Russell County Public Schools. Dennis taught history and coached football at Castlewood High School and later became the school’s assistant principal and athletic director. He later served as principal at Copper Creek Elementary School, Oak Grove Elementary, and the Russell County Career and Technology Center. He was the supervisor for the Career and Technical Education programs for Russell County Schools before retiring in 2009. However, compelled by his love for teaching and dedication to the students of his community, he continued teaching driver’s education courses until his second retirement in 2013. Faith and family defined the life that Dennis built and enjoyed with Glenna. He was a longtime member of Fort Gibson United Methodist Church, where he served as a Sunday School teacher, lay leader, Chairman of the Administrative Council Board, church historian, member of the United Methodist Men, and a member of the choir. Dennis was a noted Bible scholar and embraced opportunities to teach and mentor members of his church and community. Dennis was dedicated to recording family and local history. He was regarded as the patriarch of the Hensdill family, having carefully kept records related to the family’s origins and role in the history of southwest Virginia. Dennis loved music and was both a musician and songwriter. He also appreciated the beauty of the Earth on which God had placed him, and he enjoyed traveling with Glenna. His favorite place, however, was their home on Copper Ridge in Castlewood, from which he admired the valleys and ridges of the place that he loved most. He is survived by his loving wife of forty-five years, Glenna Bratton Hensdill, three sisters Earnestine (and husband Ray) Castle of Erwin, Tennessee, Jeweldine Hodges of Castlewood, Virginia, and Shirley Carlson of Abingdon, Virginia, as well as many loving nieces and nephews. Following the COVID-19 restrictions set forth by the Governor of Virginia on face-covering requirements and social distancing, Funeral Services for Dennis Garland Hensdill will be conducted at 2:00 p.m. Sunday, April 18, 2021, in Castlewood Funeral Home Chapel in Castlewood, Virginia with Rev. Dr. Kevin Richardson officiating. Interment will follow in Temple Hill Memorial Park in Castlewood, Virginia. Pallbearers will be Darryl Hensdill, John Hensdill, Eric Hodges, Justin Phillips, Jonathan Phillips, Bob Bratton, Jonathan Cooper Hensdill, and Colton Phillips. Honorary Pallbearers will be the men of Fort Gibson United Methodist Church. The family will receive friends from 1:00 p.m. until 2:00 p.m. Sunday, April 18, 2021, in Castlewood Funeral Home, Castlewood, Virginia. A radio broadcast of the service will be available on the Castlewood Funeral Home parking lot on radio station 88.9 FM during the service for those who would like to remain in your vehicle. In lieu of flowers, contributions may be made to the Fort Gibson United Methodist Church Memorial Fund, P.O. Box 86 Castlewood, Virginia 24224. Online condolences may be sent to the Hensdill family through our website and a video tribute and funeral service may be viewed at www.castlewoodfuneralhome.com. Castlewood Funeral Home is in charge of the arrangements.

CASTLEWOOD, VIRGINIA - Dennis Garland Hensdill, 72, of Castlewood, Virginia, passed away peacefully in the presence of family on Wednesday, April 14, 2021. He was preceded in death by his parents, Arnold William and Eula Childress Hensdill,... View Obituary & Service Information

The family of Dennis Garland Hensdill created this Life Tributes page to make it easy to share your memories.

Send flowers to the Hensdill family.