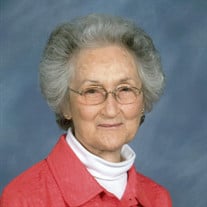 Click to View Service ST. PAUL, VIRGINIA – Our beloved mother, Edna Lois Salyer Meade, 86, went to be with her Lord and Savior on Monday, August 24, 2020. She was the daughter of the late Benjamin and Garma Dingus Salyer. She was born the sixth child during the hard times of the Great Depression in West Dante, Virginia. Her family later moved to Hamlin where they all shared working on the family farm. She was preceded in death by one brother, Harry Salyer, and three sisters, Mabel Kirby, Vivian Bouchard, and Marianne Davis. Lois was in the first graduating class of Castlewood High School after Temple Hill High School burned down. She left home after graduating to attend college at Radford University. She graduated with a Bachelor of Science Degree in Education. She returned home to teach at her old high school. She taught Chemistry and Home Economics. After her children were born, she moved to Castlewood Elementary School where she taught first grade. She later moved to Arty Lee Elementary School and Dante Elementary. She ended her teaching career as a First Grade teacher. She taught school for 38 years in Russell County, Virginia touching many lives through her time. She enjoyed 29 years of retirement. Through her retirement years, she enjoyed traveling. She was able to visit all 50 states, serve on several mission trips to Mexico, and visited a niece in Ethiopia while she and her family were living there. To say the least, she enjoyed traveling. Our mother possessed a lot of wit and charm. She enjoyed being around other people and helping those that she could. She was very well known in the St. Paul/Castlewood area. We often said, “It is like going to town with the mayor” when you went somewhere with her. She knew everyone. She enjoyed leading the Senior Group of the area that met once a week for entertainment and food. She also led the seniors for many years at Hamlin Baptist Church. She and her sister, Virginia, were regular volunteers at the Russell County Fair each year. They also were judges for the Washington County Fair each year. She started a local Bodacious Red Hat Club in the area. She was the queen of the group. One of her craziest moments was dressing up for Halloween and leading the Easter Bonnet parade with her groups. Our mother drew her strength from her strong faith in the Lord. She always believed the Lord would provide your needs accordingly. She was a member of Hamlin Baptist Church for most of her life. She taught Sunday School, Bible School, was active in the W.M.U. and sang in the church choir. She dearly loved her church family. Our mother is survived by her one son, Ronald David, and wife, Eleanor of St. Paul, Virginia; one daughter, Susan Mullins, and husband, Joe of St. Paul, Virginia; the biggest apple of her eye was her grandchildren, Valerie Lasley and husband, Steven of Castlewood, Virginia, Andrew Mullins of St. Paul, Virginia, and Hannah Mullins of Greenville, North Carolina; she felt very honored to be able to enjoy her great-grandchildren, Macee Lasley, Kaden Lasley, Makalia Smith and husband, Justin, and Jonathan Lasley; also survived by a great-great-grandchild, Ava Smith. To say the least, she loved being called “Nanny”. She is also survived by two sisters, Virginia Steffey of Castlewood, Virginia and Mildred Harris and husband, Edwin of Charlotte, North Carolina; and one brother, Ray Salyer and wife, Shirley of Newport News, Virginia. She treasured her many nieces and nephews. She was very fortunate to have several great friends whom she shared some of her last days with her. We would like to give a special thank you to them. We felt like they became part of our family. They include Rhonda Patrick, Valerie Lasley, Virginia Riggs, Ashley Jacobs, Ashley Patrick-Fields, Sonia Fields, and Misty Jacobs. Following the COVID-19 restrictions set forth by the Governor of Virginia on face-covering requirements and social distancing, Funeral Services for Edna Lois Salyer Meade will be conducted at 1:00 p.m. Thursday, August 27, 2020, in Castlewood Funeral Home Chapel in Castlewood, Virginia with Dr. Joseph Fuller officiating. Entombment will follow in Valley View Mausoleum at Temple Hill Memorial Park in Castlewood, Virginia. Pallbearers will be grandsons and friends from the Hamlin Baptist Church. The family will receive friends from 11:00 a.m. until 1:00 p.m. Thursday, August 27, 2020, in Castlewood Funeral Home in Castlewood, Virginia following the same restrictions. In lieu of flowers, donations may be made to Dante Rescue Squad, P.O. Box 669, Dante, Virginia 24237. A radio broadcast of the service will be available on the Castlewood Funeral Home parking lot on radio station 88.9 FM during the service for those who would like to remain in your vehicle. Online condolences may be sent to the Meade family through our website and a video tribute, and funeral service may be viewed at www.castlewoodfuneralhome.com. Castlewood Funeral Home is in charge of the arrangements.

The family of Edna Lois Salyer Meade created this Life Tributes page to make it easy to share your memories.