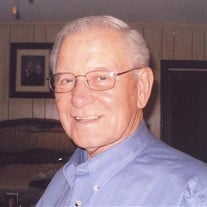 ST. PAUL, VIRGINIA - Emmett M. Bailey, 91, went to be with the Lord on September 7, 2019, at Russell County Hospital, Lebanon, Virginia. He was born March 11, 1928, in Trammel, Virginia to the late Homer Lee and Earnestine "Ernie" Amburgey Bailey. He was preceded in death by his first wife, June McCarty Bailey, one sister, Joyce Bailey Edwards Bryan, and stepson, Harold Leonard, Jr. The family moved soon after his birth to Dante, Virginia until he was 10 years old, then moved to Clinchco, Virginia due to his father's employment with the coal mines. At the age of 17, he joined the Merchant Marines and was sent to Sheep's Head Bay, Brooklyn, New York for training in 1945. After his training, he was placed on a ship with a skeleton crew waiting for orders loaded with wartime materials, but before the ship left the bay, Germany surrendered. Emmett sailed many times to other countries hauling cargo, then on the return trips, they might have brought "troops back home". He traveled many oceans and seas to foreign countries during 1945-1948. He received an Honorable Discharge from the Coast Guard. In 1948 while on leave, he married Lorena June McCarty and soon became a coal miner for Clinchfield Coal Company, also known as Pittston Coal Corporation, where he worked for 35 years retiring at Moss No. 3 Prep Plant. He was an active 70 plus year member of the U.M.W.A. Local #1259 and a member of the Pound Masonic Lodge #59 A.F. & A.M. for over 60 years. He enjoyed hunting, fishing and being active in the Democratic Party. Emmett was a member and Deacon at the Assembly of God Church in St. Paul and was presently attending Hamlin Baptist Church in Hamlin, Virginia when his health allowed him to go. He is survived by his wife, Mary Margaret Selfe Leonard Bailey; three sons, Mitch Bailey of Daniel Island, South Carolina; Jeff Bailey and wife, Sheila of Meggett, South Carolina, and Mark Bailey and wife, Betty of St. Paul, Virginia; two sisters, Faye Bailey Sykes and husband, Elmer of Palm Coast, Florida and Hope Bailey Blankenship of Livonia, Michigan; stepdaughter, Kay Farmer and husband, "Tooter" of Lebanon, Virginia; one aunt, Elsie Kiser Amburgey of Columbus, Ohio; six grandchildren; two step-granddaughters; and many nieces, nephews and cousins. A Celebration of Life Reception will be held from 2:00 p.m. to 6:00 p.m. Saturday, September 14, 2019, at the Farmers Market Pavilion in St. Paul, Virginia. In lieu of flowers, memorials and contributions may be made to the Shriners Hospitals for Children, P.O. Box 8500, Lockbox #7642, Philadelphia, Pennsylvania, 19178-7642 or to St. Jude Children's Research Hospital, P.O. Box 1000, Dept. 142, Memphis, Tennessee 38101-9908. A special thanks to those who helped with his stay at Grace Healthcare in Abingdon, Virginia, Healthsouth in Kingsport, Tennessee, Johnston Memorial Hospital in Abingdon, Virginia, and Holston Valley Medical Center in Kingsport, Tennessee. Also, for our neighbors and friends, Shelia and Freddie Barnette, who put him to bed every night, who shook his hand, and told him they loved him and wished him a good night's rest and as well as everyone that called or dropped by to wish Emmett well wishes and prayers, Thank You and God Bless each of you. Online condolences may be sent to the Bailey family through our website and a video tribute may be viewed at www.castlewoodfuneralhome.com. Castlewood Funeral Home is in charge of arrangements. 1 Peter 5:10 NIV. And the God of all grace, who called you to his eternal glory in Christ after you have suffered a little while, will himself restore you and make you strong, firm and steadfast. To Him be the power forever and ever. Amen.

ST. PAUL, VIRGINIA - Emmett M. Bailey, 91, went to be with the Lord on September 7, 2019, at Russell County Hospital, Lebanon, Virginia. He was born March 11, 1928, in Trammel, Virginia to the late Homer Lee and Earnestine "Ernie" Amburgey... View Obituary & Service Information

The family of Emmett M. Bailey created this Life Tributes page to make it easy to share your memories.

Send flowers to the Bailey family.