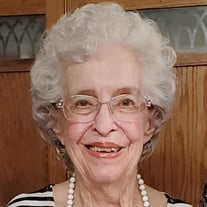 CASTLEWOOD, VIRGINIA – Eva Lou Litton Layman, 86, of Chandler, Arizona, formally of Castlewood Virginia, passed away on Tuesday, November 19, 2019. She was born in Castlewood, Virginia on May 3, 1933, daughter of the late Carl and Lula Litton. She was preceded in death by her husband, Rev. Grant Layman; one daughter, Mary Lou Layman Turner and one sister, Madeline Holbrook. Eva was a loving daughter, sister, devoted Minister’s wife, mother, grandmother, great grandmother and Teacher. Growing up on the farm, she never lost the love for farm items and decor. This was reflected in the lovely homes she and her family lived in. Eva attended Milligan College where she met the love of her life and husband of fifty-one years, Grant Layman. They married in 1953 and had two children, Mary Lou and Timothy. She earned her bachelor’s degree in education from Ottawa University. As an Elementary School Teacher, she adored her school children and loved seeing many of her students later in life and listening to their accomplishments. She was very devoted to her family and a variety of animals including, dogs, cats, and llamas. Eva was the epitome of class and grace. She is survived by her one son, Tim Layman of Chandler, Arizona; one son-in-law, Tim Turner of Lancaster, Ohio, six grandchildren, Steven Turner and wife, Andrea of Roanoke, Indiana, Christopher Turner and wife, Cecilia of Lancaster, Ohio, Stefanie Turner Alten and husband, Matt of Canal Winchester, Ohio, Christina Turner of Lancaster, Ohio, Bryana Layman Pavlov and husband, Cody of Oro Valley, Arizona, and Azaria Ford of Chandler, Arizona; her dear sister, Annette Salyer of Castlewood, Virginia; in addition, she is also survived by several great-grandchildren, one niece, and three nephews. Funeral Services for Eva Lou Litton Layman will be conducted at 7:00 p.m. Sunday, November 24, 2019, in Castlewood Funeral Home Chapel, Castlewood, Virginia with Rev. Mike Moore officiating. Committal Services will be conducted at 11:00 a.m. Monday, November 25, 2019, in Temple Hill Memorial Park, Castlewood, Virginia. Family and Friends will meet at the funeral home and go in procession to the cemetery leaving at 10:30 a.m. Monday. Pallbearers will be Tim Turner, Steven Turner, Christopher Turner, Roger Barney, Brian Barney, and Justin Barney. The family will receive friends from 5:00 p.m. to 7:00 p.m. Sunday, November 24, 2019, at Castlewood Funeral Home, Castlewood, Virginia. Online condolences may be sent to the Layman family through our website at www.castlewoodfuneralhome.com. Castlewood Funeral Home will oversee the arrangements.

CASTLEWOOD, VIRGINIA &#8211; Eva Lou Litton Layman, 86, of Chandler, Arizona, formally of Castlewood Virginia, passed away on Tuesday, November 19, 2019. She was born in Castlewood, Virginia on May 3, 1933, daughter of the late Carl and Lula... View Obituary & Service Information

The family of Eva Lou Litton Layman created this Life Tributes page to make it easy to share your memories.