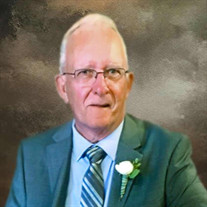 “I have fought a good fight; I have finished my course; I have kept the faith.” II Timothy 4:7 CASTLEWOOD, VIRGINIA – Everette Maynard Franklin, 74, died Tuesday, October 13, 2020, at Bristol Regional Medical Center in Bristol, Tennessee. He was born in Russell County, Virginia; son of the late, Joseph Everette and Bessie Minton Franklin. He was preceded in death by one sister, Nancy Bellamy. Everette loved to watch his granddaughter play softball, loved to fish and garden, and enjoyed watching the Atlanta Braves play baseball. He attended Lakeshore Community Church in Abingdon, Virginia. He is survived by his wife of fifty years, Patty Franklin; one daughter, Leslie Salyers and husband, Jamie of Abingdon, Virginia; one son, Steven Franklin and wife, Teresa of Castlewood, Virginia; one sister, Anne Lorene Haynes and husband, Phil of Bristol, Tennessee; four granddaughters, his little darlin, MacKenzie Franklin, Shanda Stevens and wife, Robin, Samantha Stevens and fiancé, Calvin Overbay, and Sierra Arena and husband, Zach; three great-grandchildren, Zoe Overbay-Stevens, Ezekiel Arena, and Addison Arena; and several nieces and nephews. Following the COVID-19 restrictions set forth by the Governor of Virginia on face-covering requirements and social distancing, Funeral Services for Everette Maynard Franklin will be conducted at 2:00 p.m. Tuesday, October 20, 2020, in Castlewood Funeral Home Chapel in Castlewood, Virginia with Brother Jeff Bellamy officiating. Interment will follow in Temple Hill Memorial Park in Castlewood, Virginia. Pallbearers will be Jeff Phillips, Jeff Head, Calvin Overbay, Jay McConnell, Scott Moore, and Doyte Chaffin. Honorary Pallbearers will be Brandon Phillips, Tyler Phillips, David Haynes, and the staff at Wise Correctional Unit 18 in Coeburn, Virginia. The family will receive friends from 12:00 p.m. until 2:00 p.m. Tuesday, October 20, 2020, in Castlewood Funeral Home in Castlewood, Virginia. . A radio broadcast of the service will be available on the Castlewood Funeral Home parking lot on radio station 88.9 FM during the service for those who would like to remain in your vehicle. Online condolences may be sent to the Franklin family through our website and a video tribute may be viewed at www.castlewoodfuneralhome.com. Castlewood Funeral Home is in charge of the arrangements.

The family of Everette Maynard Franklin created this Life Tributes page to make it easy to share your memories.

“I have fought a good fight; I have finished my course; I have...

Send flowers to the Franklin family.