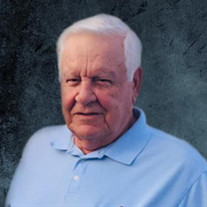 CASTLEWOOD, VIRGINIA - Fines L. Dishman, Sr., 81, died Saturday, December 5, 2020, at Bristol Regional Medical Center in Bristol, Tennessee. He was born in Dante, Virginia; son of the late Everett and Ruby Atkins Dishman. He was preceded in death by his wife, Henrietta Castle Dishman; four brothers, Paul "Poochie" Dishman, Everett "Diddle" Dishman, Jr., Ernest Dishman, and Roger Dishman. Fines retired from the Clinchfield Railroad where he was an engineer. He was a devoted Christian and member of the Sulfur Springs Methodist Church in Castlewood, Virginia. He loved music and enjoyed cooking. He is survived by his daughter, Jill Edmonds, and husband, David of Castlewood, Virginia; one son, Fines Dishman, II and wife, Pam of Castlewood, Virginia; five grandchildren, Chris Vella, Sarah Witkowski, Hannah Edmonds, Staff Sgt. Reid Edmonds and wife, Danielle, and Gabrielle Vella; four great-grandchildren, Kohwyn and Kamdyn Witkowski, Spencer Phillips, and Phoenix Graves; several nieces and nephews. Following the COVID-19 restrictions set forth by the Governor of Virginia on face-covering requirements and social distancing, a Private Funeral Service for Fines L. Dishman, Sr. will be conducted in Castlewood Funeral Home Chapel in Castlewood, Virginia with Rev. Scott Million and David Edmonds, Jr. officiating. Entombment will follow in the Chapel of Love Mausoleum at Temple Hill Memorial Park in Castlewood, Virginia. Pallbearers will be Staff Sgt. Reid Edmonds, Danny Clay, Alfie Dishman, Shannon Dishman, Coleman Cook, and Scott Steffey. Honorary Pallbearers will be Joe Tomlinson, Glenn Jessee, Ronnie Milton, Billy Castle, the men of Clinchfield Railroad, and his Hardee’s friends. A radio broadcast of the service will be available on the Castlewood Funeral Home parking lot on radio station 88.9 FM during the service for those who would like to remain in your vehicle. The family would like to give special thanks to Rebecca Varney, FNP, and the Doctors and Staff of Bristol Regional Medical Center in Bristol, Tennessee. Online condolences may be sent to the Dishman family through our website and a video tribute and funeral service may be viewed at www.castlewoodfuneralhome.com. Castlewood Funeral Home is in charge of the arrangements.

The family of Fines L. Dishman Sr. created this Life Tributes page to make it easy to share your memories.

Send flowers to the Dishman family.