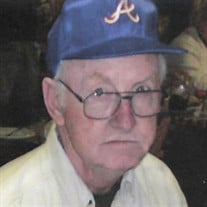 CASTLEWOOD, VIRGINIA - Garland Kennedy, 74, died Tuesday, April 23, 2019 at his home. He was born in Castlewood, Virginia; son of the late Ofearl and Thelma Bush Kennedy. He was preceded in death by his wife, Hazel Kennedy; one sister, Anna... View Obituary & Service Information

The family of Garland Kennedy created this Life Tributes page to make it easy to share your memories.

Send flowers to the Kennedy family.