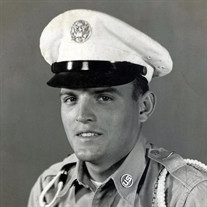 CASTLEWOOD, VIRGINIA - Jack Davis Dingus, 85, died Thursday, November 14, 2019, at Mountain View Retirement Home in Lebanon, Virginia. He was born in Castlewood, Virginia; son of the late Lloyd and Rhoda Jessee Dingus. He was a veteran of the... View Obituary & Service Information

The family of Jack Davis Dingus created this Life Tributes page to make it easy to share your memories.

Send flowers to the Dingus family.