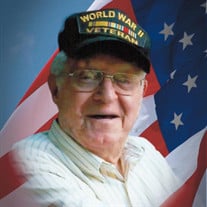 CASTLEWOOD, VIRGINIA – James “Harrell” Bartee, 99, went home to be with the Lord on Thursday, October 8, 2020, at his home with family by his side. He was born on May 5, 1921, in Lebanon, Virginia; son of the late Dode and Eliza Jane Bartee. He was preceded in death by his wife, Agnes Fields Bartee; one daughter, Mitzi Rose; one son, Rocky Bartee; one step-son, Danny Fields; and one grandson, Bobby Bartee; three brothers, John, Roy, and Tom Bartee; and one sister, Helen Crowder. He served in the Army and was a World War II Veteran. He fought under the command of General Patton and was in four major battles, including the Battle of the Bulge. We are very thankful that the Lord watched over him and brought him home safely to us. He was also one of the founding members of Calvary Baptist Church on Gravel Lick Road in Castlewood, Virginia, and helped build the Riverside Baptist Church in St. Paul, Virginia. He loved the Lord, reading his Bible, and going to church. He was always witnessing to the lost and telling them what Jesus had done for them. He was a great tenor singer and led the singing and sang specials at many area churches. He loved the outdoors, was an avid fisherman, and loved ginseng hunting. He also enjoyed spending time with his family. He is survived by his children; Ronnie Bartee and wife, Patsy of Manchester, Maryland, Tommy Bartee of Castlewood, Virginia, Ginger Carter and husband, Larry of Dante, Virginia, April Hackney and husband, Rick of Cleveland, Virginia, Kimberly Puckett and husband, Allen of St. Paul, Virginia, and Shane Bartee and wife, Jamie of St. Paul, Virginia; one sister, Mildred Steffey of Mt. Pleasant, South Carolina; fourteen grandchildren, twenty-six great-grandchildren, ten great-great-grandchildren; and a host of nieces and nephews. Following the COVID-19 restrictions set forth by the Governor of Virginia on face-covering requirements and social distancing, Funeral Services for James “Harrell” Bartee will be conducted at 8:00 p.m. Monday, October 12, 2020, in Castlewood Funeral Home Chapel in Castlewood, Virginia with Pastor Jim Pratt and Pastor Travis Price officiating. Committal Services and Interment will be conducted at 11:00 a.m., Tuesday, October 13, 2020, in Temple Hill Memorial Park in Castlewood, Virginia. Family and friends will meet at the funeral home and go in procession to the cemetery leaving at 10:30 a.m. Tuesday. Pallbearers will be family and friends. The family will receive friends from 6:00 p.m. until 8:00 p.m. Monday, October 12, 2020, in Castlewood Funeral Home in Castlewood, Virginia. The family would like to give special thanks to caregivers, Chrissy Hall and Patricia Molinary. Online condolences may be sent to the Bartee family through our website and a video tribute may be viewed at www.castlewoodfuneralhome.com. Castlewood Funeral Home is in charge of the arrangements.

The family of James "Harrell" Bartee created this Life Tributes page to make it easy to share your memories.

Send flowers to the Bartee family.