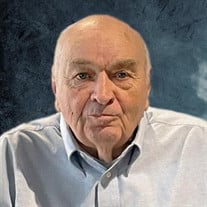 ST. PAUL, VIRGINIA – James Aubrey Ward, 85, passed away on Monday, February 28, 2022, at Holston Valley Medical Center, Kingsport, Tennessee. He was born in Stotesbury, West Virginia; son of the late William Richard and Rena Evelyn Cumiford Ward. He was preceded in death by one brother, William Luther Ward; one son, James Aubrey Ward, Jr.; and one daughter, Valerie Leigh Ward. Aubrey was a member of First Baptist Church in St. Paul, Virginia. He was also a member and past master of St. Paul Masonic Lodge # 343 A.F. & A.M, to which he devoted much of his time. He retired from Wise County Public School System, where he taught and coached for over thirty years. Known as Coach Ward to his many students and athletes, he touched many young lives and will be greatly missed by his family, friends, and the thousands of students he inspired. He is survived by his wife of sixty-four years, Patricia Lunsford Ward; one son, John Travis Ward of St. Paul, Virginia; one brother, Charles “Jibber” Ward and wife, Brenda of Coeburn, Virginia; six grandchildren, Megan Ward, Emily Ward, Jack Ward, Charlie Ward, Katie Foutz, and Josh Johnson and wife, Erin; one great-grandchild, Aiden Johnson; and several nieces and nephews. Funeral Services for James Aubrey Ward will be conducted at 2:00 p.m. on Friday, March 4, 2022, at Castlewood Funeral Home Chapel, Castlewood, Virginia with Charles “Jibber” Ward officiating. The funeral will be preceded by a Masonic Service, conducted by St. Paul Lodge #343 A.F. & A.M. Interment will follow in Laurel Grove Cemetery, Norton, Virginia. Pallbearers will be members of St. Paul Masonic Lodge #343 A.F. & A.M. The family will receive friends from 12:30 p.m. until 2:00 p.m. on Friday, March 4, 2022, at Castlewood Funeral Home, Castlewood, Virginia. In lieu of flowers, donations may be made to St. Jude Children’s Research Hospital online at www.stjude.org or by mail at 501 St. Jude’s Place, Memphis, Tennessee 38105. Online condolences may be sent to the Ward family through our website at www.castlewoodfuneralhome.com. The funeral service will be available for viewing on our website following the service. Castlewood Funeral Home is in charge of arrangements.

The family of James Aubrey Ward created this Life Tributes page to make it easy to share your memories.

Send flowers to the Ward family.