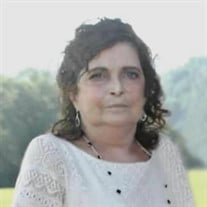 CASTLEWOOD, VIRGINIA – Janet Wolfe Salyer, 58, passed away on Monday, May 10, 2021, in Lebanon, Virginia surrounded by her loving family. She was born in Chicago, Illinois; daughter of the late Bradley Wolfe. She was preceded in death by her brother, Ronnie Wolfe; father and mother-in-law, Jack and May Bell Randolph; and brother-in-law, Ed Salyer. Most of her career was spent in some form of law enforcement. She loved reading case law and anything pertaining to that. She worked for the Russell County sheriff’s office as a dispatcher, she was a District Court Judge Secretary, then finally moving to a Hearings Officer at Keen Mountain and then to Wallens Ridge State Prison. Janet loved her family and being a nana more than anything in the world. She is survived by her husband of thirty-five years, Donnie Salyer; one daughter, Amanda N. Harris and husband, Ryan of Castlewood, Virginia; one son, Shane Salyer and wife Tabbie of Castlewood, Virginia; one grandson, Ryland Lane Harris of Castlewood, Virginia; her mother, Shirley Phillips and husband, Arthur of Dante, Virginia; and one sister, Sandra Phillips of Dante, Virginia; and three step-grandchildren, Tristan Harris, Annaica Harris, and Brantley Jackson Townes, all of Castlewood, Virginia. Following the COVID-19 restrictions set forth by the Governor of Virginia on face-covering requirements and social distancing, Funeral Services for Janet Wolfe Salyer will be conducted at 2:00 p.m., Thursday, May 13, 2021, in Castlewood Funeral Home Chapel in Castlewood, Virginia with Pastor Wayne Lambert officiating. Entombment will follow in the Chapel of Love Mausoleum at Temple Hill Memorial Park in Castlewood, Virginia. Pallbearers will be Family and Friends. The family will receive friends from 1:00 p.m. until 2:00 p.m., Thursday, May 13, 2021, in Castlewood Funeral Home in Castlewood, Virginia. The family wishes to express their appreciation for their exceptional care and help with mom: Ella Greear, Joyce Burke, Peggy Keith, Bobbi Jo Dingus, Tabbie Salyer, Castlewood Rescue Squad, the nurses at Russell County Hospital, and Dr. Michael Ulrich. Online condolences may be sent to the Salyer family through our website and a video tribute and the funeral service may be viewed at www.castlewoodfuneralhome.com. Castlewood Funeral Home is in charge of the arrangements.

CASTLEWOOD, VIRGINIA &#8211; Janet Wolfe Salyer, 58, passed away on Monday, May 10, 2021, in Lebanon, Virginia surrounded by her loving family. She was born in Chicago, Illinois; daughter of the late Bradley Wolfe. She was preceded in death... View Obituary & Service Information

The family of Janet Wolfe Salyer created this Life Tributes page to make it easy to share your memories.