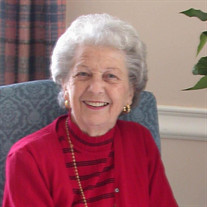 NORMAN, OKLAHOMA – Jean Steele Culbertson, age 95, passed away peacefully at her home on Sunday, May 23, 2021. Jean was born on June 5, 1925, on the family farm in Swords Creek, Virginia and spent her youth there with her six brothers and sisters in the home her father built. After graduating from Honaker High School, she went to work for the Norfolk and Western Railway as a telegraph operator. She was assigned to the Depot in Coeburn, Virginia where she met her future husband, R.L. Culbertson. R.L. later said after meeting Jean he told a close friend, “I’m going to marry that girl one day.” They did marry on her birthday in 1945 and spent 53 close years together until his death in 1998. After the marriage, they settled in Coeburn and began to raise a family. In 1958 they moved to Castlewood, Virginia where Jean was active in the community and could always be found in one of her multiple vegetable gardens in the summer. She and R.L. were past members of the Order of the Eastern Star. They both were active volunteers in the Helping Hands organization, working to provide food and other necessities to individuals in need. Jean was a member of Fort Gibson United Methodist Church and the United Methodist Women. She was diligent about having fresh flowers on the altar each Sunday. She often used flowers from her own garden to refresh the arrangements. Her tradition of providing fresh flowers each Sunday lives on through other committed church members today. Jean was preceded in death by her husband, R.L. Culbertson, her parents, William Thomas and Maude Blankenship Steele, her great-granddaughter, Cora Jean Wrather, and her six siblings: brothers Birdest and Winford Steele, and sisters Helen Wyatt (Sam), Ruth Ball (Joe), Eleanor Caffi (Van), and Dorothy Moore (Bill). She is survived by her two children, Dr. Jan L. Culbertson of Norman, Oklahoma and Robert L. Culbertson, Jr. (Michelle) of Knoxville, Tennessee. She also is survived by her grandchildren: Kristin Wrather (Ben) of Columbia, Tennessee, and David Culbertson of Powell, Tennessee. She was blessed to have two great-grandchildren, Sam and Lila Wrather. In addition, she has several beloved nieces and nephews with whom she loved to visit. In 2005 Jean decided to move to Norman, Oklahoma to be near her daughter, Jan. After moving to Norman, Jean lived at Rivermont Independent Living Center where she made new friends. She was an especially good listener and consoler. Jean was in good health until the last two years when she was diagnosed with ovarian cancer. She underwent surgery and chemotherapy for a year and a half before deciding to discontinue treatment. She stated that she had lived a long and blessed life, and she felt ready to meet her Heavenly Father. Her strong faith sustained her family, especially as she struggled through the last days of her life. Her work is done. She is now at peace. Funeral Services for Jean Steele Culbertson will be conducted at 2:00 p.m. Sunday, May 30, 2021, at Fort Gibson United Methodist Church in Castlewood, Virginia with Rev. Kevin Richardson officiating. Entombment will follow in the Chapel of Love Mausoleum at Temple Hill Memorial Park in Castlewood, Virginia. The family will receive friends from 1:00 p.m. until 2:00 p.m. Sunday, May 30, 2021, at Fort Gibson United Methodist Church. In lieu of flowers, contributions may be made to Holston United Methodist Home for Children, 404 Holston Drive, Greeneville, Tennessee, 37743; or Children’s Hospital Foundation, 901 N. Lincoln Blvd., Suite 305, Oklahoma City, Oklahoma, 73104. The family would like to thank Life Springs Hospice in Norman, Oklahoma for their care of Jean and the family. Online condolences may be sent to the Culbertson family through our website and a video tribute may be viewed at www.castlewoodfuneralhome.com. Castlewood Funeral Home is in charge of the arrangements.

NORMAN, OKLAHOMA &#8211; Jean Steele Culbertson, age 95, passed away peacefully at her home on Sunday, May 23, 2021. Jean was born on June 5, 1925, on the family farm in Swords Creek, Virginia and spent her youth there with her six brothers... View Obituary & Service Information

The family of Jean Steele Culbertson created this Life Tributes page to make it easy to share your memories.