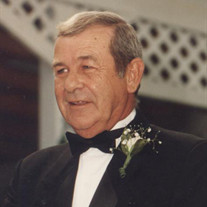 CASTLEWOOD, VIRGINIA - Jerry R. Tiller, 80, died Tuesday, April 23, 2019. He was born in Hurley, Virginia; son of the late Rufus and Orpha Evans Tiller. He was preceded in death by two brothers, Bob Tiller and Parker Tiller. He moved to Polebridge Road in Wise, Virginia when he was four years old and lived upstairs in the old Maple Grove school house where his parents taught school. He graduated from J. J. Kelly High School in 1956; attended LMU and Clinch Valley College and the Cordell-Hull School of Law. He received his law degree from the University of Richmond in 1962 and immediately volunteered for the United States Army where he served in the JAG Corp in Petersburg, Virginia and Korea, and eventually adopted a son from there. In 1965 he began his private practice of law with George Popp in St. Paul, Virginia and later Lebanon, Virginia, becoming well known in Wise and Russell County as an aggressive but very effective attorney. He vigorously defended his clients, often irritating the opposing attorney and Judge. There are a lot of "Jerry Tiller" stories floating around among his fellow attorneys. He became a mentor to many young lawyers. He was successful in numerous appeals to the Virginia Supreme Court, some of which were responsible for a change in Virginia law. He was later joined in the practice of law by his wife, Linda Large Tiller, Kevin Tiller, and his son, David Tiller, becoming known as Tiller and Tiller P.C. He was appointed as the Commissioner of Accounts in Russell County, a position he held from July 14, 1975 until his retirement in 2016. He enjoyed hunting from an early age, had a green thumb and raised huge gardens for many years, giving away most of the produce. Those left to cherish and smile at many memories are his wife, Linda Large Tiller; his children, Jon Tiller and wife, Linda, Rachel Tarr, David Tiller and wife, Kimberly, and Rebecca Jessee and husband, Bob; his grandchildren, Megan Tiller, Katie Tiller, Sarah Tiller, Sarah Gibson, Katherine Tarr, Luke Jessee, Max Jessee, Alice Tiller, and Sam Tiller; two nieces, Bethany Tiller and Allison Francis; three nephews, Rod Tiller, Bobby Tiller, and Trevon Tiller; one sister-in-law, Janie Tiller; and several other nieces and nephews. A Celebration of Life Service for Jerry Tiller will be conducted at 8:00 p.m. Friday, April 26, 2019 in Castlewood Funeral Home Chapel, Castlewood, Virginia with Rev. Mike Moore and Judge Michael Moore officiating, where we invite you to share your memories and Jerry stories. Committal Services will be conducted at 11:00 a.m. Saturday, April 27, 2019 in Nash Family Cemetery, Coeburn Mountain Road, Wise, Virginia. Family and Friends will meet at the funeral home and go in procession to the cemetery leaving at 10:00 a.m. Saturday. Pallbearers will be Rod Tiller, Bobby Tiller, David Robinson, Davis Robinson, Ronson Thomas, and Grant Marshall. Honorary Pallbearers will be Billy Joe "Red" Scarberry, Gene Couch, Charles Gray, Larry Buchanan, Randy Eads, Stephen Quillen, William "Bill" J. Sturgill, Donald Welch, and Robbie Mabe. The family will receive friends from 5:00 p.m. to 8:00 p.m. Friday, April 26, 2019 in Castlewood Funeral Home, Castlewood, Virginia. On line condolences may be sent to the Tiller family through our website and a video tribute may be viewed at www.castlewoodfuneralhome.com. Castlewood Funeral Home is in charge of the arrangements.

CASTLEWOOD, VIRGINIA - Jerry R. Tiller, 80, died Tuesday, April 23, 2019. He was born in Hurley, Virginia; son of the late Rufus and Orpha Evans Tiller. He was preceded in death by two brothers, Bob Tiller and Parker Tiller. He moved to... View Obituary & Service Information

The family of Jerry R. Tiller created this Life Tributes page to make it easy to share your memories.

Send flowers to the Tiller family.