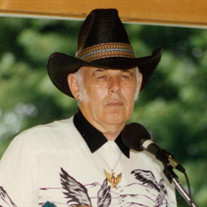 CASTLEWOOD, VIRGINIA – Jessie McKinley “Jake" Jones, 88, passed away on Thursday, April 21, 2022, at his home. He was born in Russell County, Virginia; son of the late William “Bill” and Zinia Casteel Jones. He was preceded in death by his wife of sixty-six years, Hazel Frances Salyer Jones; son, Jerry Jones; three grandchildren, Amanda King, Angie Jones, and Michael Meade; one sister, Margie Hudson; and infant brother, Clyde Jones. He was an ordained Minister of the Holiness Faith and a licensed Minister with the Emmanuel Church of Jesus Christ. He was the pastor and founder of Collins Chapel Church since 1970. He was the leader of the group known as the “True Gospel Singers” and the lead singer and banjo picker for the group “Skywatchers”. He played the banjo since 1960 and wrote hundreds of songs. He had just recently published a book called “topics of Truth”. He had lots of fans who will mourn his departure. He was also a former construction worker, the owner of Jones Auto Sales and Auction, owner and founder of K & J Auto Sales, and Precious Memory Gift Shop. He was also a member of VINADA, the Virginia Auctioneer Association, and FNIB. He is survived by his son, Benny L. Jones and fiancée, Mary Greear of Castlewood, Virginia; two daughters, Janice Hurd and husband, Roger of Castlewood, Virginia and Ellen Meade and husband, Denver of Castlewood, Virginia; two granddaughters, Amy Brown and husband, Jeremy of Christiansburg, Virginia and Lisa Kiser and husband, David of Castlewood, Virginia; six great-grandchildren, Camden, Nolan, Brady, and Dawson Brown and Ryan and Jana Kay Kiser; two great-great-grandchildren; and one niece. Funeral Services for Jessie McKinley “Jake” Jones will be conducted at 2:00 p.m., Sunday, April 24, 2022, in Castlewood Funeral Home Chapel, Castlewood, Virginia with Rev. Darrell Milgrim, Rev. Roy Baldwin, and Rev. Dwayne Barnette officiating. Interment will follow in Temple Hill Memorial Park, Castlewood, Virginia. Pallbearers will be Gary Collins, Stan Burton, Jerry McCarty, Mark McCarty, Mike Taylor, and Josh Meade. Honorary Pallbearers will be all members, past and present, of Jessie Jones and the True Gospel Singers, and The Skywatchers. The family will receive friends from 6:00 p.m. until 8:00 p.m., Saturday, April 23, 2022, at Castlewood Funeral Home, Castlewood, Virginia. Online condolences may be sent to the Jones family through our website and a video tribute may be viewed at www.castlewoodfuneralhome.com. The funeral service will be available for viewing on our website following the service. Castlewood Funeral Home is in charge of arrangements.

The family of Jessie McKinley "Jake" Jones created this Life Tributes page to make it easy to share your memories.

Send flowers to the Jones family.