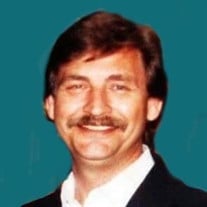 MIAMI, FLORIDA - Jimmy Joe “J.J.” Whitaker, 75, of Dante, Virginia, the firstborn of Ralph Lawrence and Oma Lee (Leedy) Whitaker, passed away on Sunday, January 19th, 2020 in Miami, Florida after a four-year battle with cancer. Educated at Castlewood High School and Miami Dade College. However, his wisdom and knowledge extended far beyond his formal education. He served in the US Army. In his youth, he worked in car repair and welding. As an adult, he excelled in banking and finance and went on to be a very successful executive for the Exposition Corporation where he managed home shows in the Miami, Florida area. Jim later went on to open his own exposition company and started a successful window and door business. Jim had many interests including breeding, raising, and training champion German Shepards. He enjoyed computers, building, and remodeling. However, Jim is best known for his enthusiasm for car racing and classic cars. He designed and built race cars that ran in the Hooters Cup, at Hialeah Speedway, and tracks all over the Southern states. Later in life he bought and modified classic cars. He won awards for his 1935 Chrysler PT convertible and displayed them with pride. He loved attending car shows with his family where he made many friends. Jim’s father once said that “Jim never met a stranger”. Jim was a beloved husband, father, grandfather, great-grandfather, brother, uncle, nephew, cousin, and friend. He loved and was loved by animals and children wherever he went. He could best be described as a dreamer, a fighter, a master communicator, and a man who always stood out in a crowd. He had a million stories which he told with such animation that you felt you were there. He captured every room he entered and made everyone laugh. Jim’s sense of humor and contagious laughter lifted spirits in all those that knew him. Jim could never be described as ordinary because he strived for and achieved exceptionalism in everything he did. Jim is survived by his loving wife of forty-seven years, Linda Lee (Austin) Whitaker. His six children Jimmy Joe Whitaker Jr. of Georgia, Angela Becker and her husband Ken of South Carolina, Kimberly Reckles and her husband Andrew of Georgia, Scott Whitaker and his wife Monica of Georgia, Jennifer Lesek and her husband Joe of Florida, Bonnie Vedo and her husband Nick of Florida. His eleven grandchildren Amber Weber, Clayton Reckles, Natalie Whitaker, Terah Reckles, Elisa Whitaker, Alexandra Fletcher, Paige Fletcher, Bianca Partlow, Savannah Fletcher, Aniyah Whitaker, Levi Lesek, thirteen great-grandchildren, several cousins, nieces, and nephews. He is also survived by his sisters Linda Cordle and Pauline Hart, and her husband Greg; aunts Betty Lou Savage, Beatrice Taylor, Joan Austin, and his uncle Boyce Whitaker, and joins his late brother Sammy Whitaker and parents mentioned above. Jim loved being a Whitaker and was proud of his family history and instilled that in his children. He enjoyed attending the annual Whitaker reunion and catching up with his cousins and other family members. His passing leaves a huge void in our family and he will be dearly missed. Funeral Services for Jimmy Joe “J.J.” Whitaker will be conducted at 12:00 p.m. Friday, February 7th, 2020, in Hamlin Baptist Church, 4426 Red Oak Ridge in Castlewood, Virginia with Rev. Jim Pratt officiating. Interment will follow in Temple Hill Memorial Park in Castlewood, Virginia. Pallbearers will be his sons, Jimmy J. Whitaker Jr. and Scott Whitaker, and his sons-in-law, Ken Becker, Andy Reckles, Joe Lesek, and Nick Vedo. The family asks everyone to join them for a reception at the Western Front Hotel, located at 3025 Forth Avenue, St. Paul, Virginia 24283. Online condolences may be sent to the Whitaker family through our website at www.castlewoodfuneralhome.com. Castlewood Funeral Home is in charge of the arrangements.

The family of Jimmy Joe "J.J." Whitaker created this Life Tributes page to make it easy to share your memories.

Send flowers to the Whitaker family.