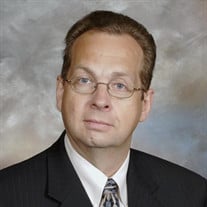 ST.PAUL, VIRGINIA - Rev. Joe Mullins, 58, went to be with his Lord on Friday, January 28, 2022. Joe was a great teacher, pastor, and friend to all. He was a member of First Baptist Church, St. Paul, Virginia. Joe was a graduate of Castlewood High School class of 1981. He continued his education at Southwest Virginia Community College and received an associate’s degree in Business Administration and Business Management. He continued his education at the University of Virginia College at Wise where he received a Bachelor of Science degree in Elementary Education. During the last few years of college, he felt the Lord calling him to his ministry. He continued his education after college at Southwestern Baptist Theological Seminary in Wake Forest, North Carolina. He received a Master’s of Divinity in the Pastoral Ministry. He served several churches as a pastor in North Carolina and Virginia. Those churches included Guest River Baptist Church in Norton, Virginia, Clinchco Baptist Mission of Clinchco, Virginia, Sulphur Springs Baptist Church in Warrenton, North Carolina, Balfour Baptist Church in Hendersonville, North Carolina, Grace Baptist Church of Mount Holly, North Carolina, Chapel Baptist Church of Mount Holly, North Carolina, and Turkey Creek Baptist Church of Leicester, North Carolina. He had a great passion for being a servant and leading others to the Lord. He also served with several local Baptist associations and on the state board of North Carolina. He enjoyed mission trips where he served on several international mission trips. They included trips to Mexico, Romania, and Brazil. He also was able to participate in many local mission projects. He taught Bible classes at Norlina Christian School in Norlina, North Carolina for several years. Joe loved to go bowling and he often enjoyed a game of golf with friends. He loved playing games and being part of a prank. He enjoyed cooking and was a great one. Another hobby he enjoyed was collecting antique cake plates, old cookbooks, and eagles. His greatest joy was his family. He loved his wife, children, brothers, and sisters. Joe was born in Dante, Virginia; son of the late Bill and Juanita Chafin Mullins. He was preceded in death by two sisters Edna Layne and Jean Ross; and one brother, Tommy Andrew Mullins. He is survived by his wife of thirty-eight years, Susan Mullins; one son, Andy Mullins of St. Paul, Virginia; one daughter, Hannah Mullins of Greenville, North Carolina; two brothers, Allen Mullins and wife Judy of Statesville, North Carolina and James Chafin of Alexandria, Virginia. three sisters, Kathy Ruff and husband, Jim of Dante, Virginia, Connie Hudson and husband, Buddy of Alexandria Virginia, and Pamela Meade and husband, Phillip of Lebanon, Virginia; three aunts, Barbara “Bobbi” Smith and husband, Clett, Judy Mullins, and Faye Day, all of North Carolina; and many nieces and nephews that he loved and adored very much. He was a fur dad to his "boyz"- Epie and Toby with the latest addition being his cat "Boots". A Private Celebration of Life will be held at a later date. Joe loved and had a great passion for International missions. He always emphasized the Lottie Moon Christmas Offering. He said, "We will never be able to pay off Lottie Moon. The debt of reaching others for Christ will never be paid". The family request memorials to be made to the International Mission Board--Lottie Moon Christmas Offering, 3806 Monument Avenue, Richmond, Virginia 23230. Please indicate that the donation is in memory of Rev. Joe Mullins. Online condolences may be sent to the Mullins family through our website at www.castlewoodfuneralhome.com. Castlewood Funeral Home is in charge of arrangements.

ST.PAUL, VIRGINIA - Rev. Joe Mullins, 58, went to be with his Lord on Friday, January 28, 2022. Joe was a great teacher, pastor, and friend to all. He was a member of First Baptist Church, St. Paul, Virginia. Joe was a graduate of Castlewood... View Obituary & Service Information

The family of Rev. Joe Mullins created this Life Tributes page to make it easy to share your memories.

Send flowers to the Mullins family.