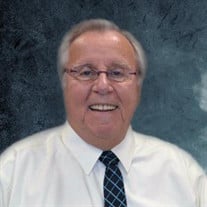 WISE, VIRGINIA - John H. Burnett took his heavenly wings on Monday, May 25, 2020, in Holston Valley Medical Center in Kingsport, Tennessee. He was born in 1939 along with his twin sister at the beginning of World War II in Stone, a small town in the middle of England. At the age of five, he began to play the piano. He joined the town band as a young boy and at the age of eighteen, he enlisted as a soldier in the British Army, only to win a scholarship to the Royal Academy of Music, Kneller Hall, in London. John was an accomplished trumpet player with some of the Big Bands in England as well as being chosen for the Queen's Own Hussars, a cavalry regiment of the British Army. John lived in London for several years after completion of his duties in the Army and in 1979 he immigrated to Canada where he lived for several years. John pursued a career in Security Consulting and was soon transferred to the Chicago area for work with the company in the security field. After many years of working and experiences with a security company John started and owned International Security Planners. While in the Chicago area John began to fulfill his dream of forming his band. Through long hours of hard work and dedication, John eventually formed his jazz/swing band and served as the band's Maestro. Known as the famous John Burnett Orchestra, the band performed in many nightclubs, weddings, theatres, and many jazz festivals in the Chicago area. Being such a music lover, John accepted a job as a DJ with WDCB Radio in Chicago as a morning host playing everyone's favorite jazz. John was loved by his listeners and was named by them as their British American Buddy. Each morning sign-off of Chip, Chip Cheerio was known throughout the Chicago area. John's great love for music was one of the greatest accomplishments of his life. It was while in the Chicago area that John met and married his lovely wife and upon retirement they moved to Virginia and settled in Wise County. Left behind to mourn the loss of John is his loving wife, Joyce Sifford Burnett of Wise, Virginia. Also, surviving are his children: daughter Laura Fry and husband, Mike of Orangeville, Ontario Canada; one son, Richard of Fergus, Ontario Canada; three grandchildren, Sonny Burnett, Jules Burnett, and Evan Fry all of Canada; one sister, Edie Whittaker of Stone England; several nieces and nephews living in England also survive. John is also survived by two step-sons: Aaron Sifford of Norton, Virginia, and Chris Yancey and wife, Malissa of Marion, Indiana; five step-grandchildren also survive. Upon John's request, his body will be cremated with some ashes being sent to England to scatter at the location where he was born and raised. The remainder of his ashes will be given to his wife and his children. A Celebration of Life Service will be conducted at 2:00 p.m., Saturday, September 5, 2020 at 15624 Bill Dean Road, St. Paul, Virgina 24283. In lieu of flowers, contributions may be sent to the family. Online condolences may be sent to the Burnett family through our website at www.castlewoodfuneralhome.com. Castlewood Funeral Home is in charge of the arrangements.

WISE, VIRGINIA - John H. Burnett took his heavenly wings on Monday, May 25, 2020, in Holston Valley Medical Center in Kingsport, Tennessee. He was born in 1939 along with his twin sister at the beginning of World War II in Stone, a small town... View Obituary & Service Information

The family of John H. Burnett created this Life Tributes page to make it easy to share your memories.

Send flowers to the Burnett family.