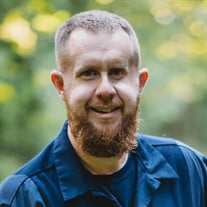 GATE CITY, VIRGINIA – Joshua Lee Powers, 36, passed away on Monday, July 26, 2021, at his home. He was born in Kingsport, Tennessee; son of the late Dennis James Powers. He was preceded in death by his paternal grandparents, John W. and Lona Powers. Josh was a member of Wolfes Church in Duffield, Virginia. He loved his guns and vehicles and was a member of Seven-Slot Outcast and Ford F-100 Truck club. He is survived by his wife, Christina Powers; one son, James Myron Powers; mother, Rebecca Powers of Nickelsville, Virginia; father-in-law and mother-in-law, Myron and Janet McGuire of Jonesborough, Tennessee; two nieces, Charity and Brooklyn Pitts; one sister-in-law, Miranda Pitts of Fall Branch, Tennessee; maternal grandparents, Fern and Offeral Keith of Castlewood, Virginia; and several aunts, uncles, and cousins. Funeral Services for Joshua Lee Powers will be conducted at 7:00 p.m. Thursday, July 29, 2021, at Castlewood Funeral Home Chapel in Castlewood, Virginia with Preacher Ronnie Baxter and Adam Roberts officiating. Committal Services and Interment will be conducted at 11:00 a.m. Friday, July 30, 2021, in Powers Cemetery, Grouse Hollow Lane, Nickelsville, Virginia. Family and friends will meet at the funeral home and go in procession to the cemetery leaving at 10:00 a.m. Friday. Pallbearers will be Levi Lee, David Dingus, Harley Dingus, Johnny Pitts, Bryan Denson, and Phil Bear. Honorary Pallbearers will be Chris Wild, Dana Wild, Luke Keith, Cory Vinson, and Tim Crawford. The family will receive friends from 5:00 p.m. until 7:00 p.m., Thursday, July 29, 2021, at Castlewood Funeral Home in Castlewood, Virginia. In lieu of flowers, donations may be made to the family to help with funeral expenses. Online condolences may be sent to the Powers family through our website and a video tribute may be viewed at www.castlewoodfuneralhome.com. The funeral service will be available for viewing on our website following the service. Castlewood Funeral Home is in charge of the arrangements.

GATE CITY, VIRGINIA &#8211; Joshua Lee Powers, 36, passed away on Monday, July 26, 2021, at his home. He was born in Kingsport, Tennessee; son of the late Dennis James Powers. He was preceded in death by his paternal grandparents, John W. and... View Obituary & Service Information

The family of Joshua Lee Powers created this Life Tributes page to make it easy to share your memories.