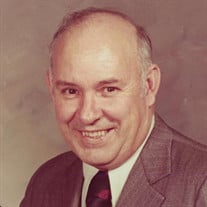 LIMESTONE, TENNESSESEE –Lewis Alfred Franklin, 97, died Friday, April 3, 2020, at The Waters of Johnson City Nursing Facility. He was born in Fremont, Virginia, the son of the late James Franklin and Delcie Fleming Franklin. He is preceded in death by four brothers; James Kyle Sperow, Marshall Ellis Sperow, Harold Lee Sperow, and Joseph Sperow; four sisters, Adilene Linkous, Lydia Frazier, Shelby Stout, and Nancy Sue Charles; and one special granddaughter Leia Hamilton. Lewis will be remembered for his integrity, perseverance, kindness, and service to others. He was admired and greatly loved by family, friends, neighbors, and business associates. Many sought his wisdom in times of adversity. Before enlisting in the army, Lewis worked for Ritter Lumber Company in Fremont. He served as Master First Sergeant, Cavalry Division, during the Liberation of the Philippines in World War II. He epitomized what historians refer to as the “Greatest Generation”. Lewis was an agent for Nationwide Insurance in Castlewood, Virginia for many years. Prior to that, he was the manager of Sun Motor Company. His dedication to service led him to become a member of the Castlewood Lions Club, becoming an office holder and recipient of the “Lion of the Year” award several times. Having grown up during The Great Depression, he was dedicated to working tirelessly for the underprivileged. In addition, Lewis served on several advisory boards and committees within the area. He enjoyed gardening and spending time with his grandchildren, attending horse shows, and taking them on fishing trips. He was an avid Civil War History buff and railroad history enthusiast. Upon retirement, Lewis enjoyed staying in his camper on Douglas Lake and visiting with his fishing buddies. Survivors include his wife, Marie Franklin; two daughters, Carolyn Hamilton and Kathryn Gillenwater and husband Frank; three grandchildren; Allison Austin and husband Tony, Chad Gillenwater, and Niki Hamilton; five great-grandchildren; Lewis Grayson Hamilton, Emily Austin, Nathan Austin, Katie Gillenwater and Madison Gillenwater; siblings; Patty Smith, Roger Sperow, Peggy Turner, and Norman Sperow. A Private Family Viewing and Committal Service will be held with Rev. Woody Scott officiating. Entombment will follow in the Chapel of Love Mausoleum at Temple Hill Memorial Park in Castlewood, Virginia. A Memorial Service will be held at a later date. Online condolences can be sent to the Franklin Family through our website at www.castlewoodfuneral home.com. The family would like to extend their heartfelt thanks to nurse Laura of Amedisys Hospice for her exceptional care. In lieu of flowers, the family requests your consideration for a tribute gift to the Lewy Body Dementia Association at www.lbda.org/donate. Castlewood Funeral Home is in charge of the arrangements.

LIMESTONE, TENNESSESEE &#8211;Lewis Alfred Franklin, 97, died Friday, April 3, 2020, at The Waters of Johnson City Nursing Facility. He was born in Fremont, Virginia, the son of the late James Franklin and Delcie Fleming Franklin. He is preceded... View Obituary & Service Information

The family of Lewis Alfred Franklin created this Life Tributes page to make it easy to share your memories.

Send flowers to the Franklin family.