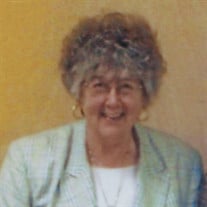 DANTE, VIRGINIA - Lois Barnette Jenkins, 76, passed away peacefully, Friday, April 13, 2018 at her home after a brief illness. Since her diagnosis of her illness, her motto she told her friends and family was "It's all going to be alright". She was born in Dante, Virginia; daughter of the late George and Lora Hale Barnette. She was preceded in death by all of her siblings, Vivian Litton, Ted Barnette, Leon Barnette and Glen "Buzz" Barnette. She was also preceded in death by three brothers-in-law, Glen Litton, Harold Jenkins and Gene Jenkins. Up until her illness, she was a floral designer at Jerry's Florist in St. Paul, Virginia and most recently at Flower Country in Castlewood, Virginia. Lois was a kind and generous woman who never knew a stranger and will be missed dearly by all her family and many friends. She leaves behind to cherish her memory her husband of fifty-eight years, Earl Jenkins; two daughters, Felicia Brooks and husband, Randy of Castlewood, Virginia and Karen Martin and husband, Mark of St.Paul, Virginia; one son, Michael Jenkins of Dante, Virginia; five grandsons, Jonathan Snipes and wife, Sasheen, Christopher Snipes and wife, Kelly, Matthew Brooks and wife, Tasha, Timothy Brooks and wife, Crystal and Keaton Browning; six great grandchildren, Shea Snipes, Ryver Snipes, Kendra Snipes, Raylin Snipes, Gracie Brooks and Cabrum Brooks; five sisters-in-law, Vangeline Chafin and husband, Dean of Bristol, Virginia, Brenda Hobbs and husband, Jim of Bristol, Virginia, Phyllis Denton and husband, Larry of Abingdon, Virginia, Margaret Jenkins of Sandusky, Ohio and Carol Jenkins of Lebanon, Virginia; five brothers-in-law, Johnny Jenkins and wife, Lois of Nora, Virginia, Ronald Jenkins and wife, Gloria of Abingdon, Virginia, Billy Jenkins, Glen Jenkins and wife, Neda of Castlewood, Virginia and Ricky Jenkins and wife, Diane; numerous nieces and nephews. Funeral Services for Lois Jenkins will be conducted at 7:00 p.m. Sunday, April 15, 2018 in Castlewood Funeral Home Chapel, Castlewood, Virginia with Rev. Jerry Estep and Rev. Jim Pratt officiating. Committal Services will be conducted at 11:00 a.m. Monday, April 16, 2018 in Temple Hill Memorial Park, Castlewood, Virginia. Family and Friends will meet at the funeral home and go in procession to the cemetery leaving at 10:30 a.m. Monday. Pallbearers will be Jonathan Snipes, Christopher Snipes, Matthew Brooks, Timothy Brooks, Jason Hobbs and Glen Jenkins Jr.. The family will receive friends from 5:00 p.m. to 7:00 p.m. April 15, 2018 in Castlewood Funeral Home, Castlewood, Virginia. The Family would like to extend our deep appreciation to all those who said a prayer or just dropped by to see our mother during her illness. Special Thanks to nieces Judy Dickenson and Deb Reed and nephew Bill Litton. We would also like to thank the Ballad Health Hospice nurses Nikki and Christina. On line condolences may be sent to the Jenkins family through our website and a video tribute may be viewed at www.castlewoodfuneralhome.com. Castlewood Funeral Home is in charge of the arrangements.

DANTE, VIRGINIA - Lois Barnette Jenkins, 76, passed away peacefully, Friday, April 13, 2018 at her home after a brief illness. Since her diagnosis of her illness, her motto she told her friends and family was "It's all going to be alright". She... View Obituary & Service Information

The family of Lois Barnette Jenkins created this Life Tributes page to make it easy to share your memories.