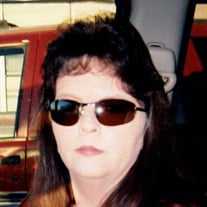 CASTLEWOOD, VIRGINIA - Loretta Lynn Phipps, 52, died Thursday, October 4, 2018 at her home. She was born in St. Paul, Virginia; daughter of the late Alfred and Effie Taylor Phipps. She was preceded in death by three sisters, Glenda Joyce Hubbard, Ava Irene Holmes, and Mildred Ann Stann; and one brother, Charles Alfred Phipps, Jr. She is survived by her husband, George Wise of Castlewood, Virginia: two sons, Dillion Phipps and Derek Phipps both of Castlewood, Virginia; one sister, Eunice Elaine Poston of Dante, Virginia; one brother, Rodney Vernon Phipps of Castlewood, Virginia; several nieces and nephews. Graveside Services and Interment for Loretta Lynn Phipps will be conducted at 11:00 a.m. Saturday, October 6, 2018 in Taylor Family Cemetery, Reeds Valley, Castlewood, Virginia with Pastor Richard Minton officiating. Family and Friends will meet at the cemetery. Pallbearers will be Family and Friends. On line condolences may be sent to the Phipps family through our website at www.castlewoodfuneralhome.com. Castlewood Funeral Home is in charge of the arrangements.

The family of Loretta Lynn Phipps created this Life Tributes page to make it easy to share your memories.

Send flowers to the Phipps family.