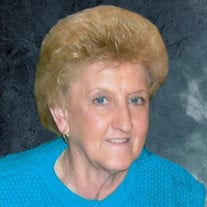 CASTLEWOOD, VIRGINIA &#8211; Lou Veda Meade Jessee, 77, died on Tuesday, March 23, 2021, in Abingdon, Virginia. She was born in Castlewood, Virginia; daughter of the late Emmett and Lou Virgie Porter Meade. She was preceded in death by her... View Obituary & Service Information

The family of Lou Veda Meade Jessee created this Life Tributes page to make it easy to share your memories.