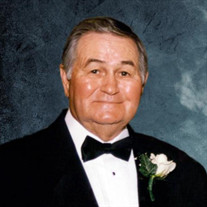 BRISTOL, VIRGINIA – God's angels came for Louis Jackson “Junior” Johnson, 88, on Sunday morning, March 14, 2021, where he peacefully passed at his home surrounded by his family. He was born in Scott County, Virginia; He was preceded in death by his wife, Goldie June Johnson; and three sisters, Elamae Elam, Pauline Keith, and Clydee Elam. Junior and June resided in Dungannon, Virginia for the biggest part of their lives where they were members of the House of Prayer Church in Castlewood, Virginia, where Junior was a founding member and served as a deacon. Junior retired from Norfolk Southern Railroad as a yard clerk. He was awarded numerous awards and accolades of safety and dedication throughout his long career. Mostly, he will be remembered for his love of God, family, and the outdoors. His favorite pastime was fishing, boating, and gardening. He was a friend to all who knew him and no one was a stranger. He truly believed your life is rich if you possess what money cannot buy. He was a loving dad of his two daughters, Brenda Sharon Powers and husband, Richard of Dungannon, Virginia, and their son, Richie Lee Francis, and Kimberly Block and husband, Edward of Bristol, Virginia, and their daughter, Natalie Mireille Block; one sister, Dolly McConnell of Weber City, Virginia; several nieces and nephews; and special caregivers who gave exceptional care, Jerome and Karen Collins and Joyce Morris. Following the COVID-19 restrictions set forth by the Governor of Virginia on face-covering requirements and social distancing, Funeral Services for Louis Jackson “Junior” Johnson will be conducted at 6:00 p.m. Thursday, March 18, 2021, in Castlewood Funeral Home Chapel in Castlewood, Virginia with Rev. Howard Edwards, Rev. Richard Powers, and Dr. Kevin Morris officiating. Committal Services and Interment will be conducted at 11:00 a.m. Friday, March 19, 2021, at Temple Hill Memorial Park in Castlewood, Virginia. Family and Friends will meet at the funeral home and go in procession to the cemetery leaving at 10:30 a.m. Friday. Pallbearers will be Richie Francis, Jerome Collins, Doug Breeding, William Collins, James Collins, and Rick Collins. Honorary Pallbearers will be Tom Mullins and Paul Elam. The family will receive friends from 5:00 p.m. until 6:00 p.m. Thursday, March 18, 2021, in Castlewood Funeral Home in Castlewood, Virginia. A radio broadcast of the service will be available on the Castlewood Funeral Home parking lot on radio station 88.9 FM during the service for those who would like to remain in your vehicle. The family would like to give special thanks to the caregivers who also gave exceptional care to their father, Nancy White, Melissa King Missy Turner, and T.J. Street. Online condolences may be sent to the Johnson family through our website and a video tribute and funeral service may be viewed at www.castlewoodfuneralhome.com. Castlewood Funeral Home is in charge of the arrangements.

The family of Louis Jackson "Junior" Johnson created this Life Tributes page to make it easy to share your memories.

Send flowers to the Johnson family.