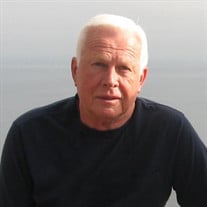 Lowell Mansel LaForce, 79, died Friday, May 10, 2019 at Holston Valley Regional Medical Center in Kingsport, TN. Mansel was born December 13, 1939 in Amonate, VA. In Tazewell County, to the late Rubye Wright LaForce and Worley Bane LaForce. In addition to his parents, he was preceded in death by his brother Reginald Douglas Ward, and his beloved granddaughter Savannah Rae Lister. His survivors include his loving wife of 47 years, Judith West LaForce of Kingsport, TN; son, Warren Bane LaForce and wife Traci of Gate City, VA; daughters, Tiersa Simone LaForce of New Market, MD and Reina Noelle LaForce of Blacksburg, VA; grandsons, Cody Lister and wife Jenn of, New Market, MD,. Logan Dockery of Knoxville, TN, and Chandler LaForce, who lived with Mansel and was a caretaker for him; granddaughters Lydia Kieffer of New Market, MD, and Kelsey Dockery and Lauren Dockery of Gate City, VA; two great-grandsons, Levi and Colton Lister of New Market, MD; and great-granddaughter Cassidy Lister of New Market, MD. He is also survived by four sisters, Paula Ward Axsom of Poquoson, VA; Rita LaForce Sutherland and husband Larry Craig of Cape Charles, VA; Alleta LaForce Johnson and husband Harold of Elkin, NC; and Carolyn LaForce Duff of Virginia Beach, VA. Mansel had a passion for travel. In his earlier years he drove his parents and sisters, and other family members to 48 of the 50 states and even visited Mexico and Canada. Mansel was also very fond and appreciative of his brother and sister-in-law, Eddie and Edna Sue Breeding of Lebanon, VA, who took him on several road trips and boat rides. He enjoyed his many cousins, nieces and nephews who listened to his stories and entertained and supported him by visiting, working and occasionally living with him on the farm. He always said, “There’s not an ugly one in the bunch!” Mansel was a man of many talents and interests. He played on the first football team at Ervinton High School in Nora, VA in 1954 and graduated from there in 1958. After college at ETSU, he came back to Ervinton and taught biology and health. He coached girls’ and boys’ basketball, track, golf, and served as athletic director until he retired in 1986. He was very proud that in 1978 he was voted Lonesome Pine District Coach of the Year in boys’ basketball. Because he always loved farming, he bought a farm in Scott County, VA. After he retired from teaching, he became a full-time farmer and was well-known for the tomatoes and tobacco he raised while managing five greenhouses. In addition to the crops, he also raised sheep, goats, cows, and Pyrenees dogs. Everything he did, he did fearlessly and worked long, hard hours daily. After retiring from farming, he moved to Churchill, TN. He lived there for a year and a half, moving afterwards to his final home in Kingsport, TN. He loved living in Kingsport, reading books, meeting new friends, listening to music, and especially eating at “the best place in town,” Golden Corral. In lieu of flowers, the family asks that you make a donation to your favorite charity in memory of Mansel. There will be a Celebration of Life service at Castlewood, VA Funeral Home on June 15, 2019, between the hours of 1 and 4 p.m. Visitation is scheduled from 1 to 2 p.m., followed by a program of music and eulogies. Visitors are welcomed to speak and to join the family in wearing shades of burgundy, which was Mansel’s favorite color.

The family of Lowell Mansel LaForce created this Life Tributes page to make it easy to share your memories.

Send flowers to the LaForce family.