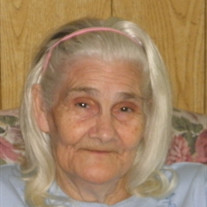 CASTLEWOOD, VIRGINIA - Lucille Harvey Beavers, 87, died Wednesday, September 5, 2018 at her home. She was born in Coeburn, Virginia; daughter of the late Emmitt and Vesta Musick Harvey. She was preceded in death by her husband, Preston A.... View Obituary & Service Information

The family of Lucille Harvey Beavers created this Life Tributes page to make it easy to share your memories.

Send flowers to the Beavers family.