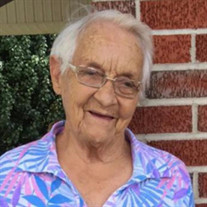 NICKELSVILLE, VIRGINIA – Maxie Salyer Jessee, 92, passed away on Monday, December 6, 2021, at Johnston Memorial Hospital, Abingdon, Virginia. She was born in Castlewood, Virginia; daughter of the late Dent Harrison and Lula Bell Burton Salyer. She was preceded in death by her husband, Buford Lester Jessee; one daughter, Barbara Keith; three brothers, Corbin, Turner, and W.B. Salyer; and one sister, Carneila Meade Bellamy. Maxie was of the Baptist Faith and loved her family and friends. She is survived by her daughter, Mary Lou Gordon and husband, Robert of Lenexa, Kansas; three granddaughters, Pamela Gordon of Seguin, Texas, Kayla Gibson and husband, Caleb of Kents Store, Virginia, and Dorothy Vicars and husband, Tim of Abingdon, Virginia; one great-grandson, Hunter Meade; one brother, Emmett Salyer and wife, Sonja of Castlewood, Virginia; special son-in-law, Elmore “Mody” Keith of Nickelsville, Virginia; and several nieces and nephews. Graveside Services and Interment for Maxie Salyer Jessee will be conducted at 12:00 p.m., Thursday, December 9, 2021, at Grassy Creek Cemetery, Castlewood, Virginia with Rev. Henry Wayne Meade officiating. Family and friends will meet at the funeral home and go in procession to the cemetery leaving at 11:30 a.m., Thursday. Pallbearers will be Jr Salyer, Michael Salyer, Gary Salyer, Tim Vicars, Jack King, Harold Jennings, and Jarvis Vicars. Due to COVID-19, the family requests those attending the Visitation and Services to wear a mask and practice social distancing. The family will receive friends from 10:30 a.m. until 11:30 a.m., Thursday, December 9, 2021, at Castlewood Funeral Home, Castlewood, Virginia. In lieu of flowers, donations may be made to St. Jude Children’s Research Hospital online at https://www.stjude.org/donate/donate-to-st-jude.html or by mail at 501 St. Jude Place, Memphis, Tennessee 38105. The family would like to give special thanks to the E.R. and third-floor doctors and nurses at Johnston Memorial Hospital in Abingdon, Virginia. Online condolences may be sent to the Jessee family through our website at www.castlewoodfuneralhome.com. Castlewood Funeral Home is in charge of arrangements.

The family of Maxie Salyer Jessee created this Life Tributes page to make it easy to share your memories.

Send flowers to the Jessee family.