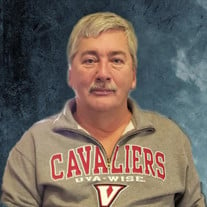 CASTLEWOOD, VIRGINIA - Michael “Mike” Shell, 67, went to be with his Lord on Saturday, March 14, 2020, at Vanderbilt University Medical Center in Nashville Tennessee. Mike was born in Dante, Virginia on September 22, 1952; son of the late Harold Shell. He was preceded in death by his mother-in-law, Edith Crabtree; father-in-law, Frost Crabtree; and sister-in-law, Linda Crabtree. A retired coal miner after forty years of service, Mike will be remembered as a boss, a colleague, a mentor, and most importantly, a friend. A devoted man of God, he cherished his Christian family at Morning Star Full Gospel Church where he was a member and served as treasurer for over twenty years. He leaves behind a family whose love for him is equaled only in his love for them. Mike will be remembered for his work ethic, his devotion to God, and the love he gave to his family. As quick with a laugh as he was a helping hand, Mike exemplified what it means to walk the Lord’s path. He is survived by his wife of forty-four years, Gayle Shell; his mother, Mary Shell; one son, Michael Shell, Ph.D., and wife Calli; one daughter, Dawn Fields and husband Jerry; four grandchildren, Ethan and Nathan Fields and Caitlyn and Natalie Shell; one brother, Sam Shell and wife Gail; sister-in-law, Nancy Crabtree; brothers-in-law, Virgil Crabtree and Kenny Crabtree and wife Kay; as well as a niece, two nephews, and several extended cousins and friends. Private Graveside Services for Mike Shell will be conducted at 1:00 p.m., Thursday, March 19, 2020, in Chapel of Love Mausoleum at Temple Hill Memorial Park in Castlewood, Virginia with Rev. Woody Scott and Rev. Marvin Cain officiating. Interment will follow in Temple Hill Memorial Park in Castlewood, Virginia. Family and Friends will meet at the funeral home and go in procession to the cemetery leaving at 12:30 p.m. Thursday. Pallbearers will be Kenny Crabtree, Virgil Crabtree, William Crabtree, Michael Abernathy, Jeff Counts, Dave Casteel, Gary Kiser, and Raymond Holloway. Honorary Pallbearers will be Steve Honto, Tam Childress, the men of Morning Star Full Gospel Church, and his mining brothers. The family will hold a memorial service at a later date. The family would like to express a special thanks to Woody Scott, Jeff Counts, Dave Casteel, the congregation of Morning Star Full Gospel Church, and the medical staff of the MICU floor of Vanderbilt University Medical Center for their care and support. Online condolences may be sent to the Shell family through our website at www.castlewoodfuneralhome.com. Castlewood Funeral Home is in charge of the arrangements.

The family of Michael "Mike" Shell created this Life Tributes page to make it easy to share your memories.

Send flowers to the Shell family.