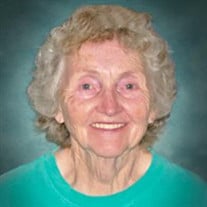 GLADE SPRING, VIRGINIA – Peggy Ann Burke Hicks, 88, passed away on Wednesday, April 20, 2022, at her home. She was born in Castlewood, Virginia; daughter of the late Charles D. and Vernie Burke. She was preceded in death by her husband of fifty-eight years, Harold L. “Bobby Joe” Hicks; two brothers, Calvin Coolidge Burke and Noah “Jack” Burke; and one sister-in-law, Sue Burke. Peggy graduated from Castlewood High School in 1954 and was married to the love of her life, Harold L. Hicks for fifty-eight years. After being married, they moved to Cleveland, Ohio and worked until their retirement. After retiring in 1989, they headed back home to Southwest Virginia to the town of Glade Spring, Virginia to be near their son, Chuck. She loved life and made friends wherever she went and loved her family above anything else. If she was not working outside the home, she was cleaning in and around the house or preparing great meals for her husband and son. Left to cherish her memory are her son, Chuck Hicks and wife, Cathy of Glade Spring, Virginia; two grandchildren, Russ Hicks of Chicago, Illinois and Ashley Taylor and husband, Walker of Kennesaw, Georgia; one great-granddaughter, Felicity Taylor; one brother, Charles D. “Buster” Burke of Castlewood, Virginia; a special niece, Becky Burke of Castlewood, Virginia; and several other nieces and nephews from near and far which include - Debbie Stanley Baca, Connie Stanley Kessinger, Johnny Hicks, and Dickey Hicks. Graveside Services and Interment for Peggy Ann Burke Hicks will be conducted at 1:00 p.m., Saturday, April 23, 2022, at Temple Hill Memorial Park, Castlewood, Virginia with her son, Chuck giving the Eulogy. Pallbearers will be family and friends. The family will greet friends and share her memories from 11:30 a.m. until 12:30 p.m., Saturday, April 23, 2022, at Castlewood Funeral Home, Castlewood, Virginia. The family would like to give special thanks to Ballad Hospice Nurses - Sandy, Sarah, Lauren, and Frieda, for the compassionate care they gave to Peggy and the comfort to her family during the time they were with us. Also, Chuck would like to personally thank everyone that has been so kind to both his mother and father during their lives. In lieu of flowers, please share your love and kindness with someone in the twilight of their life. Online condolences may be sent to the Hicks family through our website and a video tribute may be viewed at www.castlewoodfuneralhome.com. Castlewood Funeral Home is in charge of arrangements.

GLADE SPRING, VIRGINIA &#8211; Peggy Ann Burke Hicks, 88, passed away on Wednesday, April 20, 2022, at her home. She was born in Castlewood, Virginia; daughter of the late Charles D. and Vernie Burke. She was preceded in death by her husband... View Obituary & Service Information

The family of Peggy Ann Burke Hicks created this Life Tributes page to make it easy to share your memories.

Send flowers to the Hicks family.