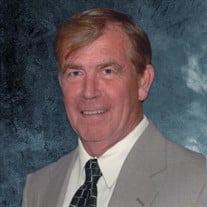 DUNGANNON, VIRGINIA - Phillip G. Osborne, 75, completed his earthly work on Monday, September 14, 2020, at Ballad Health, after an extended illness. He was born on January 28, 1945, in Kingsport, Tennessee; son of the late Glen and Burtis Osborne. He was preceded in death by one brother, Stephen David Osborne. Phil was a wonderful and loving husband, father, and grandfather who left behind an exemplary legacy of both country and community services. Phil was a third-generation businessman who owned and operated S.I. Osborne Hardware in Dungannon, Virginia. He began his community services while in high school, serving as a student council representative, assistant editor of the annual while playing, and lettering in basketball four years, and running track. Phil continued serving throughout his life. He served the Dungannon United Methodist Church, not only as a loyal member but also in numerous capacities including the Administrative Board of the church. He attended Clinch Valley College, now The University of Virginia College at Wise, where he played basketball and studied business administration. Phil served two years in the United States Army with a tour in Vietnam. He served as the Dungannon town recorder, a member of the town council, and Mayor of Dungannon. He was instrumental in the conception and realization of Clinch River Health Services and served on the clinic’s board of directors for many years. He helped both organize and acquire the funding for beginning the Dungannon Fire Department, of which he became a charter member. Phil also was instrumental in helping obtain the water and sewer systems for the town and was involved in organizing the Dungannon Development Commission. Phil was the recipient of several awards for his many community services; the 1984 Kingsport Times-News award for distinguished community service, Director of the Year Award from the Scott County Telephone Coop in 1997, where he was currently serving on the board, and the Scott County Rotary Club’s professional of the year award in 2004. He served as President of the Dungannon Ruritan several times. Phillip G. Osborne, who was always was ready to serve his country, his community, and the people of the community, in the rain, snow, and sub-zero temperatures, has now received the highest of all rewards, the loving arms of his heavenly father. As Phil requested, his services will be conducted at the Dungannon United Methodist Church in Dungannon, Virginia. Left to cherish and treasure a beautiful lifetime of memories are his wife, Margaret Banner Osborne; one daughter, Monica Ball and husband, Marc; one son, Luke Osborne and wife, April; one granddaughter, Jenna Brooke Ball; one grandson, Phillip Rece Osborne; one sister, Kathryn Asbury and husband, David; one brother, Alan Osborne and wife, Bernita; five nieces, Allison Scanlan and husband, Kyle, Laura Kathryn Patrick and husband, Aaron, Amber Middleton and husband, John, Taylor Banner, and Jordan Summers and husband, Eric; three nephews, David Osborne, Issac Asbury and wife, Tara, and Coaley Townes; brother and sisters-in-law, Sammy Banner and wife, Lois, Chuck Banner and wife, Paula, and Kim Banner Osborne and husband, Dave; along with several great-nieces and nephews. Following the COVID-19 restrictions set forth by the Governor of Virginia on face-covering requirements and social distancing, Funeral Services for Phillip G. Osborne will be conducted at 7:00 p.m. Friday, September 18, 2020, at Dungannon United Methodist Church in Dungannon, Virginia with Rev. Jackie McGowan and Dr. Todd Cassel officiating. Committal Services will be conducted at 11:00 a.m. Saturday, September 19, 2020, in Temple Hill Memorial Park in Castlewood, Virginia. Family and Friends will meet at the Dungannon United Methodist Church in Dungannon, Virginia, and go in procession to the cemetery leaving at 10:30 a.m. Saturday. Pallbearers will be Bill Culbertson, David Osborne, Chuck Banner, Mikey Brickey, Tim Mullins, and Sammy Banner. Honorary Pallbearers will be Mike O'Keefer, Doug Blackwell, Jim Scott, Ronnie Hunt, and the Management and Board of Directors of Scott County Telephone Coop. The family will receive friends from 4:00 p.m. until 7:00 p.m. Friday, September 18, 2020, at the Dungannon United Methodist Church, in Dungannon, Virginia. Online condolences may be sent to the Osborne family through our website at www.castlewoodfuneralhome.com. Castlewood Funeral Home is in charge of the arrangements.

DUNGANNON, VIRGINIA - Phillip G. Osborne, 75, completed his earthly work on Monday, September 14, 2020, at Ballad Health, after an extended illness. He was born on January 28, 1945, in Kingsport, Tennessee; son of the late Glen and Burtis Osborne.... View Obituary & Service Information

The family of Phillip G. Osborne created this Life Tributes page to make it easy to share your memories.

Send flowers to the Osborne family.