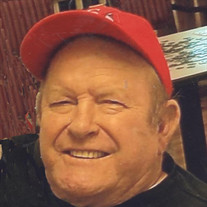 CASTLEWOOD, VIRGINIA - Ralph Meade, 80, died Sunday, October 28, 2018 at Grace Healthcare, Abingdon, Virginia. He was born in Castlewood, Virginia; son of the late N.C. and Agnes Castle Meade. He was preceded in death by his son, Jackson Christopher Meade; and one sister, Lillie Mae Mullins. He was a Veteran of the United States Army. He is survived by his wife, Brenda Meade; one sister, Irene Salyer of Kingsport, Tennessee; two brothers, Donald Meade and Roger Meade of Kingsport, Tennessee; one daughter-in-law, Shirley Meade of Wise County, Virginia; one granddaughter, Desiree Meade of Colorado Springs, Colorado; several nieces and nephews. Funeral Services for Ralph Meade will be conducted at 7:00 p.m. Thursday, November 1, 2018 in Castlewood Funeral Home Chapel, Castlewood, Virginia with Rev. Elwood Hall officiating. Committal Services will be conducted at 11:00 a.m. Friday, November 2, 2018 in Temple Hill Memorial Park, Castlewood, Virginia. Military Rites will be conducted by Veterans of Foreign Wars, Disabled American Veterans, and Virginia National Guard. Family and Friends will meet at the funeral home and go in procession to the cemetery leaving at 10:30 a.m. Friday. Pallbearers will be Family and Friends. The family will receive friends from 5:00 p.m. to 7:00 p.m. Thursday, November 1, 2018 in Castlewood Funeral Home, Castlewood, Virginia. On line condolences may be sent to the Meade family through our website at www.castlewoodfuneralhome.com. Castlewood Funeral Home is in charge of the arrangements.

The family of Ralph Meade created this Life Tributes page to make it easy to share your memories.