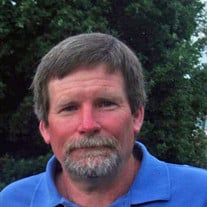 LEBANON, VIRGINIA - Ray Hammons, 55, passed away at his home unexpectedly on Wednesday, November 28, 2018. He was born in Wise County, Virginia; son of the late Hobert Hammons. He was preceded in death by his father-in-law and mother-in-law, Beecher and Joyce Mays; one nephew, Austin Jessee; and two nieces, Alicea Jessee and Amanda Jessee. He was a coal miner in Dickenson and Wise Counties for thirty years. He was a long time member of House of The Lord Church in Castlewood. He is survived by his wife of thirty-six years, Brenda Hammons; one son, Brandon Hammons and wife, Caitlin of Abingdon, Virginia; three daughters, Kayla Hammons, Whitney Hammons and friend, Nathan Baldwin both of the home, and Tiffany Heckford and Steven Wallace of Clintwood, Virginia; one granddaughter, Lily Wallace; one grandson on the way, Waylon Ray Hammons; his mother, Ocie Hammons of Dante, Virginia; three brothers, Clay Hammons, Lee Hammons and wife, Sherlene and Jim Hammons all of Dante, Virginia; two sisters, Sharon Hammons and Jim Dishman and Linda Stanley and husband, Gerald both of Dante, Virginia; one nephew, James Stanley of Dante, Virginia; three nieces, Amber Hammons, Angel Dishman both of Dante, Virginia, and Alyssa Jessee of Johnson City, Tennessee; one sister-in-law, Connie Jessee of Big Stone Gap, Virginia; several aunts and uncles. Funeral Services for Ray Hammons will be conducted at 7:00 p.m. Sunday, December 2, 2018 in Castlewood Funeral Home Chapel, Castlewood, Virginia with Rev. Ted Phillips and Rev. George Jordan officiating. Committal Services will be conducted at 11:00 a.m. Monday, December 3, 2018 at Valley View Mausoleum, Temple Hill Memorial Park, Castlewood, Virginia. Family and Friends will meet at the funeral home and go in procession to the cemetery leaving at 10:30 a.m. Monday. Pallbearers will be Family and Friends. Honorary Pallbearers will be Members of House of The Lord Church. The family will receive friends from 5:00 p.m. to 7:00 p.m. Sunday, December 2, 2018 in Castlewood Funeral Home, Castlewood, Virginia. We would like to thank and give our appreciation to the Lebanon Life Saving Crew, Officer Bush of Russell County Sheriff's Office, Sonny and Gwen Osborne, and Chad Cordle for all they did. On line condolences may be sent to the Hammons family through our website at www.castlewoodfuneralhome.com. Castlewood Funeral Home is in charge of the arrangements.

LEBANON, VIRGINIA - Ray Hammons, 55, passed away at his home unexpectedly on Wednesday, November 28, 2018. He was born in Wise County, Virginia; son of the late Hobert Hammons. He was preceded in death by his father-in-law and mother-in-law,... View Obituary & Service Information

The family of Ray Hammons created this Life Tributes page to make it easy to share your memories.

Send flowers to the Hammons family.