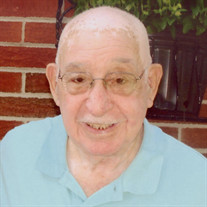 LEBANON, VIRGINIA - Roy Thomas Gilbert, 84, passed from this life to join his Lord and Savior on Thursday, February 14, 2019 at Bristol Regional Medical Center, Bristol, Tennessee. He was born in Castlewood, Virginia, and was the eighth child in the family of nine children. He was the son of the late Vince Ogden and Lou Ciley Johnson Gilbert. He was preceded in death by his brother, Joe Gilbert and wife, Carrie, brother, Emmett Gilbert and wife, Myrtle, infant sister, Gladys Gilbert, brother, Ralph Gilbert and wife, Goldie, sister, Ruby Gilbert Waldon and husband, Leonard, sister, Nora Gilbert Barnes and husband, Robert, and brother, John Gilbert and wife, Eva Gay. He was educated in the Russell County Schools, attending at Dorton School, Baker Ridge School and Castlewood High School. On June 30, 1953 he married Lois Cox in Castlewood. They welcomed two children into their home. As a young husband and father, he moved from Castlewood with his wife and son to make their home in Rensselaer, Indiana. During those years he was employed as a stone crusher operator for W.C. Babcock Construction Company and as a supervisor at Schumacher Electric. He started moving southward, residing for a time in the Indianapolis, Indiana area, the Cincinnati, Ohio area and then on to Florida. For many years he was an employee of the Sheraton Hotel Corporation and was a maintenance supervisor. Following retirement, he worked in several grocery stores and as a school crossing guard for the Manatee County, Florida Sheriff's Department and the Boynton Beach, Florida School System. In 2014 he and Lois returned to their native Southwest Virginia. Roy gave his life to Christ many years ago and was a member of churches in Indiana and Florida. At the time of his death, he was a faithful member of Rings Chapel Baptist Church in Castlewood, where he served as an usher. Always an active person, he greatly enjoyed "tinkering" and fixing things. He loved going out to eat with friends and family, talking about the "good ole days", and spending time with his family. He is survived by his wife of 65 years, Lois Cox Gilbert; son, Tom Gilbert and wife, Terrii; daughter, Debbie Gilbert Johnson and husband, John; grandson, Brandon Helton and wife, Sherry, granddaughter, Katie Westfall and husband, Mike, granddaughter, Sheah Jones and husband, Junior, granddaughter, Sabrina Johnson, grandson, Josh Loveless and wife, Lea, and grandson, Justin Loveless; ten great grandchildren, Matthew, Collin, Benjamin, George, Anna, Hannah, Isaiah, Brionna, Kiarra and Cora; sister, Mary Ellen Gilbert Johnson and husband, Harold; several nieces and nephews and many friends. Funeral Services for Roy Thomas Gilbert will be conducted at 11:00 a.m. Saturday, February 23, 2019 in Castlewood Funeral Home Chapel, Castlewood, Virginia with Brother Jim Stanley officiating. Interment will follow in Temple Hill Memorial Park, Castlewood, Virginia. Pallbearers will be grandsons and friends. Honorary Pallbearers will be Guy Castle, Freddie Meade, and J.C. Lane. The family will receive friends from 5:00 p.m. to 8:00 p.m. Friday, February 22, 2019 in Castlewood Funeral Home, Castlewood, Virginia. In lieu of flowers, donations may be made in Roy's name to Rings Chapel Baptist Church for the Parking Lot Paving Fund, c/o Ernestine Baker, P. O. Box 854, Castlewood, Virginia 24224. On line condolences may be sent to the Gilbert family through our website and a video tribute may be viewed at www.castlewoodfuneralhome.com. Castlewood Funeral Home is in charge of the arrangements.

LEBANON, VIRGINIA - Roy Thomas Gilbert, 84, passed from this life to join his Lord and Savior on Thursday, February 14, 2019 at Bristol Regional Medical Center, Bristol, Tennessee. He was born in Castlewood, Virginia, and was the eighth child... View Obituary & Service Information

The family of Roy Thomas Gilbert created this Life Tributes page to make it easy to share your memories.

Send flowers to the Gilbert family.