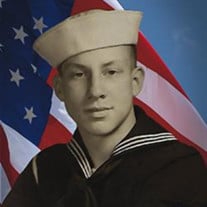 COEBURN, VIRGINIA – Seaman 1st Class Stewart Jordan, 20, was killed on June 12, 1944, when the USS Nelson was hit by enemy torpedo fire off the coast of Normandy, France, and his remains were not recovered at that time. In November 1944, a Quartermaster Graves Registration Service team was notified about human remains that washed ashore at Normandy on an unspecified date during the Allied invasion. The remains were recovered but declared unidentifiable and interred as "unknowns" at the Normandy American Cemetery. In 2018, the DPAA and the American Battle Monuments Commission exhumed this set of "unknowns" for analysis in a DPAA laboratory. DPAA analysts used modern forensic techniques that combined with historical and processing records. On August 28, 2019, the Defense POW/MIA Accounting Agency (DPAA) identified the remains of Seaman First Class Stewart Jordan, missing from World War II. He was born in Clinchco, Virginia; son of Edd Luther and Mary Baker Jordan. At the time of his death, he left behind his wife, Gloria Shirley Jordan; one son, Stewart Charles Jordan, Jr.; two sisters, Beulah Edwards and husband, Ted and Maudie Mae Webb and husband, Willard; and four brothers, Willard Jordan and wife, Mildred, Charlie Jordan and wife, Dottie, George Jordan and wife, Irene, and Bill Jordan and wife, Ann. He is survived by several great-nieces, great-nephews, and cousins. Funeral Service for Seaman 1st Class Stewart Jordan will be conducted at 12:00 p.m., Wednesday, September 8, 2021, in Castlewood Funeral Home Chapel, Castlewood, Virginia with his great-nephews, Rev. Windell Ely and Dr. Macel Ely officiating. Interment will follow in Temple Hill Memorial Park, Castlewood, Virginia. Full Military Honors will be conducted by the United States Navy Honor Guard. Pallbearers will be the United States Navy. Due to COVID-19, the family requests those attending the Visitation and Services to wear a mask and practice social distancing. The family will receive friends from 11:00 a.m. until 12:00 p.m., Wednesday, September 8, 2021, in Castlewood Funeral Home, in Castlewood, Virginia. Online condolences may be sent to the Jordan family through our website at www.castlewoodfuneralhome.com. The funeral service will be available for viewing on our website following the service. Castlewood Funeral Home is in charge of the arrangements.

COEBURN, VIRGINIA &#8211; Seaman 1st Class Stewart Jordan, 20, was killed on June 12, 1944, when the USS Nelson was hit by enemy torpedo fire off the coast of Normandy, France, and his remains were not recovered at that time. In November 1944,... View Obituary & Service Information

The family of Seaman 1st Class Stewart Jordan created this Life Tributes page to make it easy to share your memories.

Send flowers to the Jordan family.