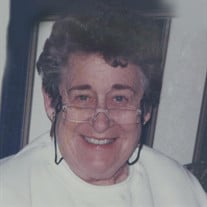 CASTLEWOOD, VIRGINIA - Shirley Anne Jones McBride, 84, died Saturday, June 15, 2019, at the Russell County Medical Center, Lebanon, Virginia. Mrs. McBride was born on a family farm near Windsor, NC, and grew up in Erwin, NC. She attended secretarial school in Florida and served in the United States Air Force where she met her husband. With her husband and daughter, she moved 19 times in 18 years before they 'retired' to Macon, GA, where they lived for 38 years. She moved to Castlewood, Virginia near her daughter after the death of her husband. She was preceded in death by her parents, Edward Patrick and Ida Johnson Jones, her beloved husband, Wayne Elden McBride, and her brother, Edward Patrick Jones, Jr. She is survived by her daughter, Kelly Renee McBride Delph and husband, Andrew, an aunt, Mary Ellen Jones Earp, and a host of nieces, nephews, and cousins. A Celebration of Life Service for Shirley Anne Jones McBride will be conducted at 3:00 p.m., Monday, June 24, 2019 at Castlewood Funeral Home Chapel, Castlewood, Virginia with Rev. Sarah Grace Montgomery officiating. She will be buried beside her parents and husband in the Erwin, North Carolina, Cemetery. The family will receive friends from 2:00 p.m. to 3:00 p.m. Monday, June 24, 2019 in Castlewood Funeral Home, Castlewood, Virginia. In lieu of flowers, donations may be made to charities she supported, such as food banks, the Imagination Library, the United Methodist Church, or veterans. On line condolences may be sent to the McBride family through our website at www.castlewoodfuneralhome.com. Castlewood Funeral Home is in charge of the arrangements.

The family of Shirley Anne Jones McBride created this Life Tributes page to make it easy to share your memories.