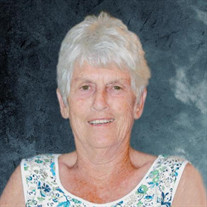 ABINGDON, VIRGINIA – Shirley Rebecca “Becky” Reasor Holbrook, 81, left her earthly home suddenly on Wednesday, May 12, 2021, to join her husband of forty-seven years, Eugene Holbrook. Becky was born in Lee County, Virginia on November 25, 1939, to Henderson and Ora Lee Boggs Reasor. She was preceded in death by her husband; parents; her in-laws, Earl and Edna Holbrook; six brothers, James, Frank, Richard, Joe, and Claude, infants Ray and Mae Reasor; and a niece Connie Reasor. She left her Olinger home and went to Clinch Valley College in Wise where she met a handsome young Air Force veteran named Eugene and they were married June 19, 1960. They moved to Roanoke Virginia where they welcomed three daughters Belinda 1961, Pamela 1963, and Penny 1964. In 1966 they moved back to Dickenson County on Long Ridge. Eugene taught school and drove a school bus and Becky took care of their home. After Eugene retired in 1994, they began their retirement years in Abingdon on the lake. They traveled to 49 States until Eugene’s health failed. He passed away May 15, 2007. Becky continued living in her lake home, traveling with daughters and their families and playing with her great-grandbabies. Becky was a member of Abingdon Baptist Church where she enjoyed meeting and study with her Sunday School class, going on bus trips, and singing in the Senior Choir. She is survived by her three daughters, Belinda Denson and husband, Keith of Roanoke, Virginia; and Pamela and Penny Holbrook of Abingdon, Virginia; four grandchildren, Josh Stanley and wife, Amy of Fredericksburg, Virginia, Hank Stanley and wife, Laura of Leesburg, Virginia, Matilda Kline and husband, Bobby of Bedford, Virginia, and Benjamin Denson and wife, Rebekah of Lafayette, Indiana; ten great-grandchildren, Willow, Wilder, Colton, and Brianna Stanley, Rylynn, Keiton, Jackson, Waylon, Weston, and Laken Kline; four sisters, Lillian Baker, Margaret Dzakowic, Norma Tankersley, and Kathy Lawson and husband, Carl; two brothers Ralph Reasor and wife, Pat, and Tommy Reasor; five sisters-in-law, Alma and Helen Reasor, Evelene Long, Marie Keenan, and Sonja Foster and husband, LA; several nieces and nephews; special friends, Marvin, Kaye, and Jamie Fleenor. Following the COVID-19 restrictions set forth by the Governor of Virginia on face-covering requirements and social distancing, a Memorial Service for Shirley Rebecca “Becky” Reasor Holbrook will be conducted at 10:00 a.m., Sunday, May 30, 2021, in Castlewood Funeral Home Chapel in Castlewood, Virginia with Dr. Steven Pollard officiating. Inurnment will follow in Temple Hill Memorial Park in Castlewood, Virginia. A Celebration of Becky’s life will follow the Inurnment, at her lake home with dinner and fellowship with family and friends. Honorary Pallbearers will be grandsons, Josh and Hank Stanley, Benjamin Denson, and Bobby Kline. The family will receive friends from 9:30 a.m. until 10:00 a.m. Sunday, May 30, 2021, in Castlewood Funeral Home in Castlewood, Virginia. In lieu of flowers, the family requests that donations be made to any dementia and heart disease research organizations. A radio broadcast of the service will be available on the Castlewood Funeral Home parking lot on radio station 88.9 FM during the service for those who would like to remain in your vehicle. Online condolences may be sent to the Holbrook family through our website and the funeral service may be viewed at www.castlewoodfuneralhome.com. Castlewood Funeral Home is in charge of the arrangements.

The family of Shirley Rebecca "Becky" Reasor Holbrook created this Life Tributes page to make it easy to share your memories.