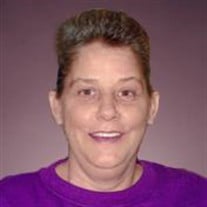 CASTLEWOOD, VIRGINIA - Tammy Powers, 52, died Friday, January 17, 2020, at Russell County Hospital in Lebanon, Virginia. She was born in Arlington, Virginia; daughter of the late Ronald Nickles. She was preceded in death by one brother, Gene... View Obituary & Service Information

The family of Tammy Powers created this Life Tributes page to make it easy to share your memories.