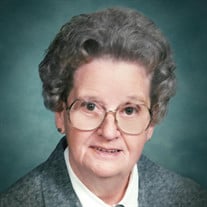 ST. PAUL, VIRGINIA – Wilma L. Kelly Blakely, 97, went to be with her precious Lord and Savior on Sunday, July 4, 2021, from the Russell County Medical Center. She was born in St. Paul, Virginia; the daughter of the late Charles and Pearl Briggs Trent. Wilma was preceded in death by her first husband, Harry M. Kelly; her second husband, Charles Blakely; one son-in-law, Danny Bush; one brother, Elmer Trent; and one sister, Frances Couch. Wilma was a life-long resident of St. Paul, Virginia where, in her earlier years, she worked as a cook at the St. Paul Hotel. She also worked as a custodian at the medical office of Dr. George Cain and the dental office of Dr. H. P. Remines. Wilma also was a volunteer with the Castlewood Rescue Squad. In her later years, she truly enjoyed and became known for her quilting and being a member of the Dante Senior Citizens. She was a devoted member for many years of the Assembly of God Church in St. Paul, Virginia and it was her love of people and her Lord, Jesus Christ, for which she will be most remembered. She is survived by one daughter, Mary Alice Bush of Castlewood, Virginia; one son, Harry Lee Kelly and wife, Juanita of St. Paul, Virginia; two grandsons, Michael Bush and wife, Tiffany of Lebanon, Virginia and Jason Lee Kelly and wife, Lynda of Bristol, Virginia; one great-granddaughter, Carmela Leigh Kelly; two step-great-grandchildren, Ava Deckard and Alec Deckard; one sister, Geraldine Bolinsky; four stepdaughters, Barbara Hight, Linda Wright, Emma Sexton, and Patty Lyttle; one stepson, Wade Blakely; special friend and caregiver, Mary Ingle and husband, Dwight; as well as other special friends, Peggy Hileman, Betty Mays, and Elizabeth Ingle; her beloved cat, Annie; and several nieces and nephews. Funeral Services for Wilma L. Kelly Blakely will be conducted at 2:00 p.m., Thursday, July 8, 2021, in Castlewood Funeral Home Chapel in Castlewood, Virginia with Rev. Lee Kidd and Hon. Michael Bush officiating. Interment will follow in Temple Hill Memorial Park in Castlewood, Virginia. Pallbearers will be Dwight Ingle, Johnny Sanslow, Jerry Sanslow, Henry Phillips, Alec Deckard, Jason Kelly, and Michael Bush. Honorary Pallbearers will be Kelly Trent and Wes Ingle. The family will receive friends from 5:00 p.m. until 8:00 p.m., Wednesday, July 7, 2021, in Castlewood Funeral Home in Castlewood, Virginia. The family wishes to express their appreciation to Russell County Medical Center’s Fourth Floor Staff that attended to Wilma just before her passing. Flowers will be accepted but donations may be made in Wilma’s memory to Dante Senior Citizens, P. O. Box 1, Dante, Virginia 24237 or Assembly of God Church, 16542 Broad Street, St. Paul, Virginia 24283. Online condolences may be sent to the family through our website and a video tribute may be viewed on our website at www.castlewoodfuneralhome.com. The funeral service will be available for viewing on our website following the service. Castlewood Funeral Home is in charge of the arrangements.

ST. PAUL, VIRGINIA &#8211; Wilma L. Kelly Blakely, 97, went to be with her precious Lord and Savior on Sunday, July 4, 2021, from the Russell County Medical Center. She was born in St. Paul, Virginia; the daughter of the late Charles and Pearl... View Obituary & Service Information

The family of Wilma L. Kelly Blakely created this Life Tributes page to make it easy to share your memories.

Send flowers to the Blakely family.