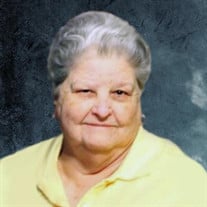 DANTE, VIRGINIA – Zona Lois Austin, 81, passed away surrounded by her loved ones on Thursday, December 3, 2020, at her home. She was born in Dante, Virginia; daughter of the late Daniel Sr. and Irene Hileman Glass. She was preceded in death by one sister, Sherry Kennedy; one granddaughter, Kayla Austin Kiser, and one great-grandson, Kaylin. Zona loved her family and always supported the Dante Rescue Squad. She is survived by her husband of sixty-three years, Burnis Austin, one daughter, Tammy Bush, and husband, Ed; three sons, Mike Austin and fiancée Dyan Artrip and her son and daughter, Joshua and Danielle, Randy Austin, and Steve Austin and wife, Gail; one sister, Teresa “Tess” Halloway, and husband, Raymond “Bud”; two brothers, Daniel “Butch” Glass, Jr. and David Glass and wife, Gerry; six grandchildren, Beth Martin, Jessica Caldwell, Logan Austin, Lacey Austin, Laken Austin, and Cody Austin; two great-grandchildren, Drake Kiser, and Kaleb Taylor; and several nieces and nephews. Following the COVID-19 restrictions set forth by the Governor of Virginia on face-covering requirements and social distancing, Funeral Services for Zona Lois Austin will be conducted at 2:00 p.m. Sunday, December 6, 2020, in Castlewood Funeral Home Chapel in Castlewood, Virginia with Rev. Teddy Phillips and Rev. Robert Combs officiating. Interment will follow in Temple Hill Memorial Park in Castlewood, Virginia. Pallbearers will be Tony Austin, Doug Austin, Cody Austin, Ed Bush, Logan Austin, and Jarred Glass. Honorary Pallbearers will be Rodney Kennedy, Marty Halloway, and Tommy Mullins. The family will receive friends from 12:00 p.m. until 2:00 p.m. Sunday, December 6, 2020, in Castlewood Funeral Home in Castlewood, Virginia. A radio broadcast of the service will be available on the Castlewood Funeral Home parking lot on radio station 88.9 FM during the service for those who would like to remain in your vehicle. The family would like to give special thanks to the Dante Rescue Squad. In lieu of flowers, donations may be made to the Dante Rescue Squad in honor of Zona Austin, at P.O. Box 668, Dante, Virginia 24237. Online condolences may be sent to the Austin family through our website at www.castlewoodfuneralhome.com. Castlewood Funeral Home is in charge of the arrangements.

DANTE, VIRGINIA &#8211; Zona Lois Austin, 81, passed away surrounded by her loved ones on Thursday, December 3, 2020, at her home. She was born in Dante, Virginia; daughter of the late Daniel Sr. and Irene Hileman Glass. She was preceded in... View Obituary & Service Information

The family of Zona Lois Austin created this Life Tributes page to make it easy to share your memories.